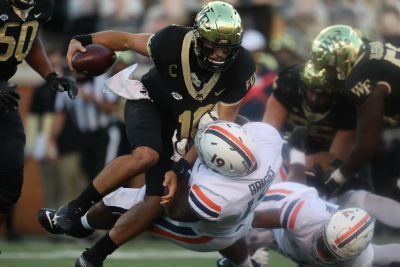 The former four-star recruit was an impact player inside for the Cavaliers, with 20 tackles, three sacks and 12 QB pressures, grading out, per Pro Football Focus, at 68.5 on the season, ranking 185th out of the 742 interior linemen in FBS in 2020.

The 6’1”, 310-pounder from Cincinnati was the highest-rated prep recruit in the Bronco Mendenhall era, and lived up to the advance billing, recording 19 tackles and three tackles for loss en route to being named a freshman All-American in 2019.

Briggs’ backup at nose tackle is freshman Jahmeer Carter (PFF grade: 52.3). You could see JMU grad-transfer Adeeb Atariwa (PFF grade: 65.8) or senior Mandy Alonso (PFF grade: 61.6) slide over from defensive end to get some snaps on the inside.

Freshman Nusi Malani (PFF grade: 59.7) has been getting more snaps at end, including a season-high 25 (and a PFF game grade of 65.4) in the 31-17 win over Louisville this past weekend.

Those four were the only players listed, along with Briggs, on the depth chart at D line for this weekend’s game with Abilene Christian.

Smiley got three snaps at defensive end in the 42-17 loss at Clemson last month.