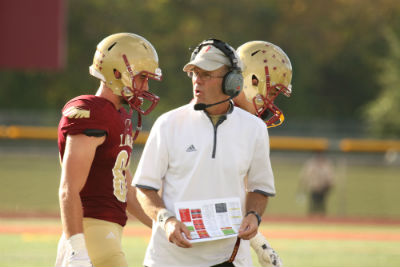 Bridgewater College football coach Michael Clark will retire this spring following his 26th season at the school, and his current offensive coordinator, Scott Lemn, has been named his successor.

Clark will direct Bridgewater through its five-game 2021 spring campaign before his retirement.

The Eagles open at Randolph-Macon on March 5, with the season concluding on April 2 with an ODAC seeding game.

“I am excited to lead this team through the spring campaign. Returning to the ‘Victory Bell’ with them in 2021 will be a challenge, but also a special reward we will chase together,” said Clark. “There is a great football staff in the office, and the administrative support for this move is something I will always appreciate.

His 164 wins are also the highest of any active head coach in the Commonwealth, with his career mark currently standing at 164-101-1.

“Mike Clark’s impact on our athletic program goes beyond the football field,” said Curt Kendall, the director of athletics at Bridgewater College. “He raised the bar for both the football program and for all sports during his tenure at Bridgewater College. His teams have always performed at a high level and the 2001 season and Stagg Bowl performance is one that will be remembered for the ages.

“Mike has always been a team player in our department and has always supported others. He leaves his mark on the football program having mentored many young coaches and developed many more young men over his time at Bridgewater College. For that, he will be missed but not forgotten. We wish Mike the best in his retirement,” Kendall said.

Clark won his sixth ODAC championship last season, with BC going 10-1 and clinching the title at home vs. Randolph-Macon. The Eagles hosted a first-round tournament game and were ranked #20 in the postseason polls.

Under Clark, Bridgewater has been far and away the most successful ODAC team on the national stage, recording 10 of the conference’s 15 NCAA tournament victories and its only two final four appearances.

The BC postseason experience peaked in 2001 when the Eagles finished their best season in school history with a 12-1 record, losing by a field goal in the Division III national championship game to perennial power Mount Union.

Clark was named the Don Hansen’s Football Gazette National Coach of the Year following that run, which included his first ODAC title.

Bridgewater had earned an NCAA at-large bid in 2000 and defeated Washington & Jefferson in the first round of the national tournament before being eliminated in overtime in the Sweet 16. BC went back to the NCAA tournament from 2002-05 after winning four more conference titles, making the NCAA semifinals in 2003 and the quarterfinals in 2002 and 2005. The Eagles won 36 straight ODAC games from 2000-06, and set a new program mark of 14 straight overall victories from 2018-19.

Clark was a four-year letterwinner at the University of Cincinnati as a defensive back, helping the Bearcats to a 9-2 record and a top-20 national ranking during the 1976 season. He coached at Murray State, Cincinnati, Virginia Tech and Virginia Military Institute, including five seasons as VT’s defensive coordinator, before being named the 14th Bridgewater head coach in 1995.

Clark lives in Bridgewater with his wife, Sharon. The couple has two daughters- Megan Clark Velez, a 2004 Bridgewater graduate, who completed her law degree from George Mason University and works for the FDA Policy office while residing in Falls Church with her husband, JD, and their children, Joey and Nora.

Clark’s younger daughter, Erin Clark Reel, who has a master’s degree in industrial engineering from New Mexico State University, lives with her husband, Adam, in Alexandria, and works for the Department of Homeland Security. 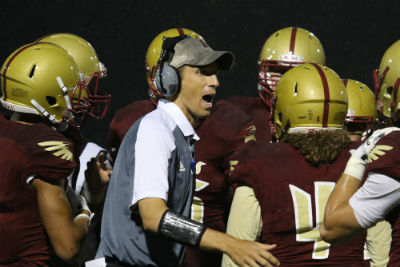 Lemn is currently serving as BC’s assistant head coach, offensive coordinator, and quarterbacks and tight ends coach. He is in his 11th year with the Eagles staff and second as a coordinator. In eight seasons as Bridgewater’s offensive line coach, he led nine All-State selections on that unit. He directed the defensive line in his first season on the BC staff.

“I am pleased to announce Scott Lemn as our next head football coach,” said Kendall. “Scott has developed over the past 11 seasons as a coach under Mike Clark’s guidance and is ready to take over our highly successful program.

Lemn was a first team All-American at James Madison in 2008 and was the Rimington Award winner as the nation’s top center while aiding the Dukes to a FCS semifinal appearance and a #1 ranking for much of that year.

He resides in Bridgewater with his wife, Rachel, and four children.

“It’s a great honor to be one who follows Coach Clark,” said Lemn. “The mentorship he’s provided me has been invaluable. I’m really excited for the opportunity to work in an athletic department that’s devoted to winning and stands for the right things, and to do it in a place where I’ve been able to grow both professionally and in life.”

“Scott understands Division III, our College and the recruiting landscape,” Kendall said. “He was a key contributor to the 2019 ODAC championship as our assistant head coach and offensive coordinator. In addition, the current football staff Mike has assembled and now handed Scott are dedicated, hard-working and knowledgeable, and will provide continuity to move our football program forward.”