Breaking down the (still) defending champs: Virginia hoops in 2020-2021 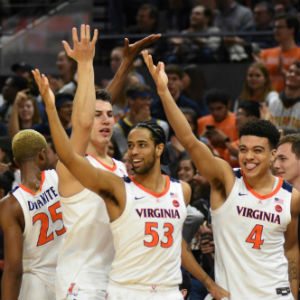 UVA basketball fans have been looking forward to the 2020-2021 season since, basically, the nets were being cut down in Minneapolis last April.

You knew that 2019-2020 was going to be a bit of a lean year with De’Andre Hunter, Ty Jerome and Kyle Guy leaving early for the NBA, and, good news, it wasn’t as lean as you’d expected, with the ‘Hoos winning 11 of their last 12, and their final eight, on their way to a surprising second-place finish in the ACC.

Sam Hauser is eligible, and getting talk about being an All-ACC and All-American.

Jay Huff is back and should get more minutes, and more touches.

A stellar incoming freshman class headlined by Jabri Abdur-Rahim, who has apparently grown two inches, to 6’7”, is coming online.

One thing: there’s a lot of new parts in the moving parts.

And Hauser, Abdur-Rahim and fellow four-star recruits Reece Beekman and Carson McCorkle, and redshirt freshman Kadin Shedrick, will all have to learn the Pack-Line on the fly, without time to get reps in the summer.

Hauser and Shedrick, at least, were able to get time in practice with the team as redshirts in 2019-2020, but the bulk of their time was working with the scout team, providing teammates with a look at what opponents do on offense and defense.

“Defensively there’s going to be a big-time adjustment for those guys, but offensively, we’re going to play to those guys’ strengths,” assistant coach Jason Williford said.

The learning curve with the Pack-Line can be steep, particularly for first-year players.

“The first-years, they’ve got to go through it,” Williford said. “Those guys. I mean, we could be practicing now. They’ve got to experience it and go through it. I think you’re much better in our system after your second and third year of gaining that experience. So, even if they were here, there’s still such a big learning curve for how, and Tony (Bennett) likes to use this, how continuous you have to be defensively. So, they’ll figure that part out.”

Maybe, then, the 2020-2021 group won’t be as good defensively as the 2019-2020 Cavaliers, who ranked first in the nation in defensive efficiency in the final KenPom.com numbers.

The good news: the offense will be light-years better than the 2019-2020 group, which ranked 234th nationally, by far a program worst in the Bennett era.

“I think we’re going to live with Jay and Sam shooting a lot of jumpers, and then we got to hope that Kihei (Clark) can shoot his clip, and we get Tomas (Woldetensae) and Casey (Morsell) and Kody (Stattmann) and Jabri and Reese to give us some additional three-point shooting,” Willford said.

The starting five figures to be Clark at one, Abdur-Rahim and Woldetensae at two and three, with Hauser, a career 44.5 percent three-point shooter, creating matchup nightmares at four, and Huff, a rare three-and-D seven-footer (38.5 percent career three; nation’s top-rated defensive player in 2019-2020) at five.