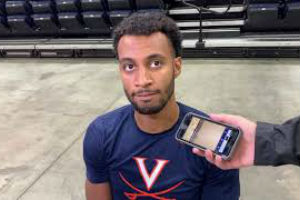 Braxton Key, possibly described best in the book Team of Destiny as a “Swiss-army knife,” may just be the the difference in the Cavaliers having a solid season to having a great one.

The big question for Virginia fans is just how will Key respond to being asked to play a bigger role.

On offense he will have to shoulder more of the scoring, trying to replace some of what De’Andre Hunter took to the NBA and Atlanta Hawks. Defensively, he’s as solid as it comes when  playing the revered pack-line defense.

One quick look at his chiseled-like frame and you know he’s also going to be asked to demonstrate Jack Salt-like qualities at times.

At Tuesday’s media day at JPJ, Key appeared ready, and excited about his upcoming expanded role.

“I knew what I had to work on during the off-season,” said Key. “We lost some players that brought unique skills to the floor. Individually they may not be replaced, but with our team, a number of players, including myself, will help fill the void.”

With 7-footer Jay Huff also expected to fill a larger role for the 2019-2020 Cavaliers, it may be a bonus that despite Huff’s limited minutes last season, many of those minutes came when Key was on the court as well. Key sees that as a big lift.

“I have a good feel for how a number of our returners operate on the floor. Mamadi, Jay, we played together last season, the curve won’t be that difficult,” said Key.

If Diakite, Huff, Key play at the level they’re capable of, then Virginia’s first-ever season as defending national champions might again last until April.

And if it does, one thing’s for certain: Key’s body is ready for the marathon.