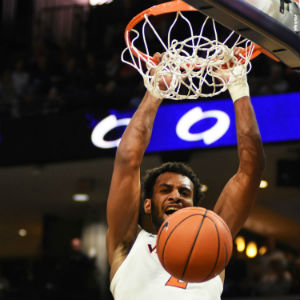 Braxton Key realized where things were headed when he first heard the news that NBA player Rudy Gobert had contracted the coronavirus.

Then the next morning, at a shootaround at UNC Greensboro, the team got the news that the ACC Tournament had been canceled.

The team would find out by the time it was back in Charlottesville that the season was over.

What made it all a “little bit better” to process: coach Tony Bennett had the team bus stop on the way home to get some ice cream.

We have a new entry in our Most Tony Bennett Thing Ever file.

“It’s definitely difficult, especially being a senior, for myself and Mamadi (Diakite), but, I mean, so many great memories, that it’s alright for me,” said Key, recounting the experience on a Zoom conference with reporters on Wednesday.

That wasn’t even two weeks ago now, which is astounding to consider, given how much things have changed of late.

Key and his teammates could be preparing for a Sweet Sixteen game tomorrow or Friday, for instance, instead of being scattered to the ends of the earth, basically under house arrest.

Virginia was one of the hottest teams in the country down the stretch this season, winning 11 of its last 12 games, including the last eight in a row.

This after dropping four of five in a mid-January stretch that had some analysts saying out loud that the defending national champs were on the wrong side of the NCAA Tournament bubble.

“All year long, we heard the noise of this being a rebuilding year, this team won’t be as good as last year’s team, whatever, and just get ready for next year, especially when we lost three in a row and four out of five games in ACC play. That’s tough to do in the middle, or the beginning actually, to make up for it,” Key said.

“Just for the for the year to go out the way it did, and we were playing great basketball, have it up and down all year. Even the loss against Louisville, I thought, was a great game. I mean, that could have gone either way, which would have made our win streak 10-plus. That was difficult, but I mean, you just have to deal with it,” Key said.

Dealing with it is more than basketball.

“Life’s been pretty strange,” Key said, speaking for everybody, really. “I’m not used to having as much free time. I mean, there’s no class, there’s no going to practice. Nothing really. I mean, it’s kind of weird, and there’s, everyone’s just kind of gone. I’m still in Virginia training and working out and everything, but just, it’s just it’s kind of crazy that everything’s gone the way it has.”

Key said his focus in the here and now is finishing up his classes online, and trying to stay in shape with an eye to launching a pro basketball career.

He has signed with an agent, and is hoping to get some workouts scheduled with NBA teams ahead of the summer draft, but of course that’s all dependent upon whatever happens next with COVID-19.

UVA, Key said, “is a really special place,” where Key grew as a person, as a basketball player, as a leader.

“I’ve never been in a role where I had to be a main leader like I was in this year, last year,” Key said. “I mean, just learning from everybody and just learning how to be a good teammate. And it was difficult, not playing as much, but it’s just taught me how to be a good, I guess, teammate, whether it’s in basketball or in life, just whether things aren’t going all your way, or the way you want it to go. There’s ways you can impact and make a difference for the collective group.

Like the rest of us, TV is a big part of the here and now for Key. He was among the many of us tuning in to the CBS rebroadcast of last year’s national-title game.

“I watched Sunday, and it was it was definitely great,” Key said. “I mean, just to give Kyle (Guy), Ty (Jerome) and Dre (De’Andre Hunter) the Twitter account and let them roam and kind of go against each other, I thought that was funny. It was great to get fans involved.”

Watching the game brought back a lot of memories.

“I kind of forgot how big that stadium was. The camera angles, to see how massive it was,” Key said. “Late in the game, how guys made big plays. Some things, you don’t see in the first or second time, but watching again, you’re looking for different things. And just the energy of it.

“I really wanted to get back there this year with this team.”