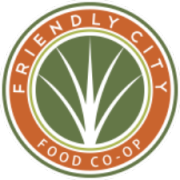 Friendly City Food Co-op is about to undergo its first full store expansion since it was established in 2011. The co-op will be 9 years old on June 6th, and is marking the occasion by adding more space for fresh, local and organic foods.

The demolition/expansion will begin on Monday, June 1, and consist of three phases. The store will remain open during all of these phases and the entire project is expected to be complete in nine months time.

Health and safety protocols will remain in place as long as necessary to prevent the spread of COVID-19.

The first phase of work consists of annexing the former Teeny Tiny Spice Co. rental space (to the left of the current store), which will become the new deli, kitchen and café areas – complete with coffee bar, salad bar, and hot bar; building new office space; and adding new storage shelving. This will all happen within space that is not in the current store footprint.

The second phase happens within the current sales floor and includes: removing the wall behind the current bulk foods shelf and opening up the sales floor; putting in a produce walk-in cooler, sinks and prep area; relocating the bulk foods area; and adding a new larger meat case.

The overall store configuration will change – the aisles that currently run east/west will rotate 90 degrees, along with the lights and signage above them, to run north/south.

Phase 3 will include moving the produce department from its current position to the area in the front end that previously housed the checkouts and seating area; installing south facing windows in the area across the front of the store which will be the new café seating; and adding a new office, close to the cashier stations.

Local firms were enlisted to carry out the project. Harman Construction is the general contractor, and Blueline is the architectural firm. Co-op general manager Steve Cooke will serve as project manager.

Harman and Blueline were the co-op’s original partners for the store’s opening project.