Boxing coach: We’re all in the same gang

Coach, as he is known around the gym, has worked with top-level amateur boxers and for a time was a personal trainer for Hollywood celebs including Al Pacino and Julia Roberts.

“That’s what drew me here,” said Burchette, a former U.S. Army drill sergeant and top amateur boxer who now heads up the boxing program at Annese Martial Arts in Waynesboro.

Burchette settled in Waynesboro last year with the goal in mind of using competitive boxing as an avenue to fight gangs.

“I found out that there was a growing gang problem here. I’ve worked with gangs, and I know what you can do with boxing to deal with the problem,” Burchette said.

The program at Annese Martial Arts isn’t just focused on gangs. You could say that Burchette, Coach, has been forming his own gang of sorts.

“We’re a team here. We’re a family,” said Burchette, who works with children as young as 3 in an afterschool program and has been building up a popular boxing-fitness program for women.

“It met my goal of getting fit. I think I’m the most fit now that I’ve been in 20 years, since I was an athlete back in college,” said Kim Arehart, the owner of Kline’s Dairy Bar in Waynesboro, who was recruited into the boxing-fitness program at Annese when Burchette showed up at the window at Kline’s last summer and has to her own surprise added sparring to her workouts.

“When he mentioned to us in class that we might do a little bit of sparring, I was the first one to say, Oh, no, not me. I was not interested in that. I’m not a fighter. I just wasn’t interested in it. I don’t know what’s gotten into me,” Arehart said.

It’s a “camaraderie thing,” maybe, Arehart thinks. “You kind of get to know the other women in there, and that can help when you’re maybe thinking, Oh, I don’t know about working out today,” she said.

Among her workout partners is Rebekah Vann, the toughest 6-year-old in a skirt that you’ll ever meet.

“One day she showed up in a skirt, and Coach said, I can’t teach somebody in a skirt how to box,” said her mother, Larisa. “I told him, She’s going to be in college someday in a club with her friends. If somebody tries to do something to her then, do you want her to say, Oh, no, I’m wearing a skirt, I can’t protect myself? He said, I hadn’t thought of it that way.”

Rebekah has taken to both the boxing lessons and the life lessons she has learned from Burchette.

“She’s tiny for her age, but there are kids her age who are introverted, and she’s their champion. That’s just started since she’s been here. She sticks up for her classmates. She tells her teacher that she’s protecting the class,” her mother said.

It comes natural from working with Burchette, who teaches and preaches from the experience of having let himself get steered down the wrong path himself as a wayward youth.

“I was in and out of trouble as a kid,” said Burchette, for whom “working with kids has given me back what I had lost as a youth.”

“I stood at the apron and threw my hands up with the champions in Golden Gloves, New York City champions, national champions, the Olympics. I have gotten back from life, which gives me the ability to not be selfish,” Burchette said.

And back to what brought him to Waynesboro – the gang problem.

“I’ve had kids from four different gangs in my gym, but the kids didn’t have a problem with one another. Because they became a family, and they supported one another, because they trained with one another in the gym. They come into the room, and they may have problems when they first get in here. But once they’re here, they learn to trust. They learn to trust because of their coach. They know my story and how I changed. And then it just happens,” Burchette said. 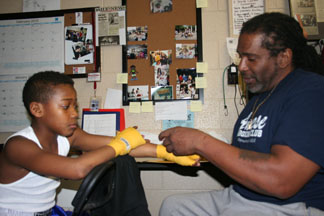 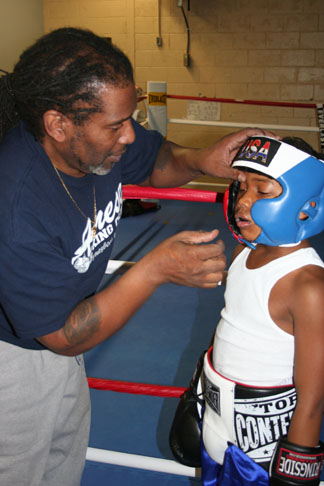 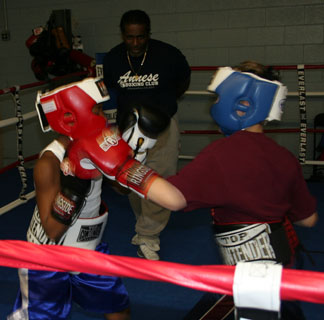 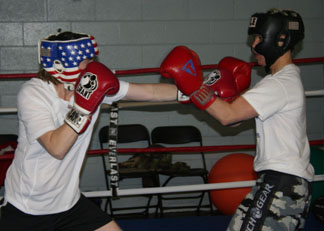