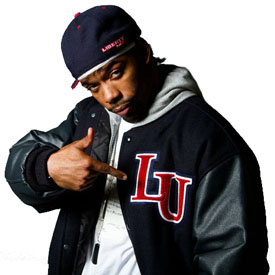 A Christian hip-hop artist is one of two things: “a corny guy trying to be gangster, or a gangster not understanding that Jesus doesn’t want to have any part of hip-hop.”

Liberty University graduate student Jason Lewis, better known these days as Humble T.I.P. (To Increase Praise), who will headline a concert at the Waynesboro YMCA on Feb. 18, is challenging the stereotypes.

“Especially with the youth, 14, 16, 18 years old, all of the adjectives that describe Christianity are negative – boring, traditional, lackluster, and sometimes more aggressive, like hypocrites, money-hungry, one-sided, stubborn. When you have all of that associated with your lifestyle, when people hear you, the first thing they’re going to think is, Just another Christian, and you’ve already got a strike against you. Then look at all of the negative adjectives associated with hip-hop. So there’s another strike. You’re kind of between a rock and a hard place. Which makes it even more so an assurance that you have to have that God wants you to do this, because just the trials and tribulations that come associated with this are many,” Lewis said.

The latest Humble T.I.P. release, “LU Anthem,” is blowin’ up, as the kids say, recording more than 51,000 YouTube views since its release three months ago. The song is an ode to Liberty University, which Lewis also attended as an undergrad.

“We got some rules and regulations, it ain’t nothing too tough
“Understand, discipline builds integrity in us
“Yeah we have a curfew, no it will not hurt you
‘You call it rules, we call it structure, holiness we pursue.”

Lewis didn’t enroll at Liberty thinking he was going to pursue a music career.

“For the longest time, my mom was convinced that this was just another college phase. Long story short, it turned into something credible. For some crazy reason, people enjoy listening to my voice on a record. And that’s gained momentum over time,” Lewis said.

The impetus for Lewis to get into music: “I’d say it’s more of a need – a need for an alternative,” Lewis said. “A lot of people enjoy the mainstream negativity that you hear on the radio, but there’s definitely a demographic that doesn’t, but still enjoys hip-hop. And for them there are alternatives like Humble T.I.P. and others who will provide Christ-centered hip hop that is still fun and energetic.”

“Where the Spirit of The Lord is, that’s my school
“No drugs sex or drinking, we define what’s cool
“A lot of people do not like us, but that’s just fuel
“That helps the flame burn brighter, we refuse to lose.”

“Whatever form of ministry you’re involved in, be it entertainment or otherwise, usually it’s going to be an extension of yourself,” Lewis said. “Sometimes I’m energetic and really on fire, and sometimes I’m calm and relaxed, and such is my music. At the end of the day, I’ve always been straightforward. My goals have never changed. My integrity has never changed. That’s the aim that i take with my music. The content is always the constant.”

FaithPoint Christian Center and the Waynesboro YMCA are teaming up to bring live Christian music to the Y in conjunction with the Y’s Friday Night Basketball on Friday, Feb. 18, at 9 p.m. Featured acts include Christian hip-hop artist Humble T.I.P. and rock band Covenant. Admission is free.

Story by Chris Graham. More on the Waynesboro YMCA at WaynesboroYMCA.com.