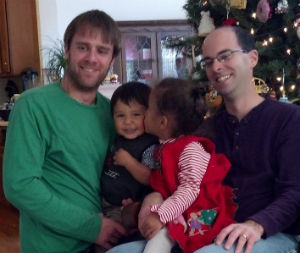 We both love both of our children and would do anything for either of them; regardless of what Virginia has to say about it. Sadly, even though we are both parents to our two children, what Virginia has to say about it is that I only have a son and my partner only has a daughter. We are a loving family with two dads and two kids, but our legal protections are less than other families. Do you have a will? Both of us do. I need one to guarantee that “my” son will have the right to live with his daddy if I die. Similarly, my partner has a will primarily so that “his” daughter will still be able to live with me if he dies. Never mind that both of our children have lived with both of us their whole lives and know both of us as Daddy. Virginia doesn’t see it that way. We would love to both be parents (in the legal definition) but that doesn’t stop us from being parents in the actual sense. After all, families come in in all types, ours just happens to be different from some. It is time for Virginia to keep the best interest of children in mind and recognize families like ours.

We live in a very conservative part of Virginia so we knew there was the possibility that two gay men raising children would raise some eyebrows. It has, but overall it’s been okay. So far, we’ve had no problems taking the “other” baby to the doctor and have even switched off care-giving in the middle of an ER visit. Of course, we have to make sure we have both insurance cards handy, because we don’t get to choose whose insurance provides the best coverage for our children; they have to be insured on the “right” Daddy’s plan. I’ve felt very lucky in day-to-day life because we’ve never had to “explain” ourselves when we both show up for an appointment, even at urgent care where we don’t have a preexisting relationship with the staff (and I get the birth year wrong… bad daddy). Even though the state doesn’t recognize both of us as parents, most people – even in conservative Virginia – do, and for me, that really matters.. It is time for the law to reflect where Virginians stand on this issue. It is time for my family to be treated the same as other families.

Our daughter starts school in a year and we’ll get to have more experiences then. Since schools are cognizant of guardianship laws that may be our first foray into really dealing with our limited rights, but I’m hopeful a simple conversation with the school administrators will set the stage for a successful relationship there too.

Ultimately, life as a dad has been great, but we’re still looking forward to the day when we feel more protected in our relationship with our children. Second-parent adoption would be a step in the right direction.