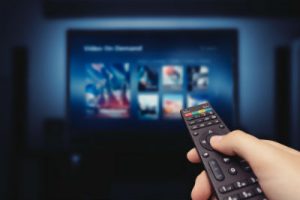 I’ve recently gotten back into a TV series from the late 1970s/early 1980s, “WKRP in Cincinnati” (Amazon Prime), that I really hadn’t seen since it fell out of syndication in the late ‘80s.

Researching “WKRP,” I was stunned to find that it was cancelled by CBS after four seasons – stunned mainly because it got so big after being cancelled and finding a new home on afternoons and evenings in syndication.

I’ve come to realize that my initial attraction to wanting to work in media came from “WKRP.”

Among the best individual TV episodes of all-time is “Turkeys Away,” which ends with the iconic line, “As God as my witness, I thought turkeys could fly.”

Another stunner: one episode that I watched the other day let slip that Jennifer (Loni Anderson) was pulling down $24,000 a year to be Mr. Carlson’s secretary.

Julia Louis-Dreyfus, along from the “Seinfeld” cast alums, found her footing post-“Seinfeld” with her portrayal of Selina Meyer, the first female vice president of the United States.

The series follows Meyer and her entourage of body man, political advisors and congressmen, senators and media elites in her orbit.

Beware: to rate the language NC-17 might be understating it.

This is #1 by a mile on my all-time comedies list.

Larry David is another “Seinfeld” alum, of the co-creator and occasional cameo vintage. “Curb” is “Seinfeld” from George Costanza’s perspective, in the form of a mockumentary following David in his post-“Seinfeld” life in California, surrounded by a cast of oddballs and eccentrics, some playing characters, others playing fictionalized versions of themselves.

It’s all as cringe-inducing as you’d expect from the guy that was the inspiration for George.

Rachel Brosnahan stars as Midge Maisel, a 1950s-era Manhattanite divorcee who aims to hit it big in the world of standup comedy.

The writing is incisive, the sets and costuming majestic.

As with “Veep,” the language is borderline NC-17.

The language and storylines here are probably other side of the border of NC-17.

The show follows the fictional life of star Phoebe Waller-Bridge, a profane thirtysomething whose motivation is finding a shagging partner, eventually affixing her attention on a hot priest, which, yeah, she does.

A key component of the presentation is that Waller-Bridge is in on the fact that we’re watching her live her life, and she talks to us frequently, a la “The Office,” though the show isn’t presented as a mockumentary.

I’m a government nerd, and specifically, a local government nerd, whose first job in journalism had me hanging around City Hall, getting to know assistants and secretaries and program supervisors to find stories to write about for tomorrow’s paper.

“Parks and Rec” finds humor in the mundane, by pointing out just how trivial it all is.

The lead, Amy Poehler, seems to be the only one there not aware that it’s all pointless, but it’s endearing, her dedication.

We follow her trying to have the Pawnee, Ind., turn a vacant lot into a park, eventually see her run for city council (ahem, done that).

All of this, and many one-off cameos from big-name stars

Another mockumentary, this one riffing off the true-crime genre, and set in a high school.

“American Vandal” follows two stories: in Season 1, as our protagonists try to solve the mystery of just who it was that drew dicks on cars in the faculty parking lot, and in Season 2, we get the mystery of the Turd Burglar, which, wow, that one was detailed.

OK, so I’m not only a government nerd, but also a tech nerd, who taught himself computer code in sixth grade, and made money on the side for years after the Great Recession designing websites.

“Silicon Valley” follows a group of tech nerds who have a great idea for an app, but no money to scale up production, and then once they begin to access the money, well, life happens.

The pace of this one is to have a cliffhanger basically episode, to the point that you don’t know, in a good way, where things are going to go weird next.

A guy is sent into space by two evil geniuses, forced to watch bad movies (bad movies being an understatement) as part of a bizarre psychological experiment.

The guy, Joel, creates two sentient robots to have buddies to watch the movies with, and the show, which originated on local TV in Minnesota in the late 1980s, is us watching them watch the bad movies, and making wisecracks about how bad the whole experience is.

This is how I’ve watched TV for the past 30 years, and somehow, I’ve been married for 20 of those years.

(Maybe it helps that my wife is from Minnesota. Actually, no. It helps that she’s got a high tolerance for nonsense.)

The worse the movie is, the better “MST3K” is, but that was probably already obvious