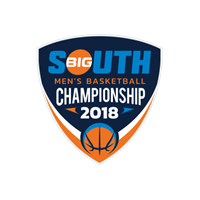 The official seedings and pairings for next week’s Big South Conference Men’s Basketball Championship are now finalized, and Radford – predicted to finish seventh in the preseason poll – is the No. 2 seed based on its current RPI of 140 through all college basketball games played of Feb. 24.  Winthrop lands in the No. 3 seed as its current RPI is 170.  The teams tied for second in the Big South standings at 12-6, and the tiebreaker procedure reached the final step of each team’s RPI due to no advantage in the previous steps.

UNC Asheville is the No. 1 seed and will host the quarterfinals and semifinals March 1-2.  Tickets are now on sale through Asheville’s ticket office and at www.uncabulldogs.universitytickets.com.  First round action beginsTuesday night, Feb. 27 with No. 7 High Point hosting No. 10 Longwood at 7:00pm, while No. 8 Charleston Southern will host No. 9 Presbyterian College also at 7:00pm.  The two first round games on Feb. 27 will be broadcast live on the Big South Network and Roku.