Big day at UVA: All’s well, even if it doesn’t end well 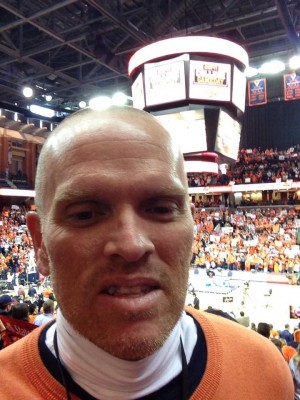 What a fun day it was at JPJ. Until about 8:50 p.m. or so. UVA fans packed the John Paul Jones Arena – twice – on Saturday. ESPN College GameDay was a zoo. The kid made the halfcourt shot!

Then came the game, and after Duke bolted to a nine-point first-half lead, the Cavs battled back to within a point at the half, opened the second half on an 18-6 run, we’d seen the script before, knew where it was going, and it was toward a happy ending.

And then the Blue Devils, having lost three of their last five in the ACC, without sixth man Rasheed Sulaimon, who was kicked out of the program after the most recent loss, on Wednesday at Notre Dame, got up off the deck.

One for 11 from three-point range, down nine with five minutes to go, Duke suddenly couldn’t miss. Actually, they did miss once, but went 5-for-6 from three down the stretch, and tipped in the other miss, scoring 22 points in the final five after getting just 47 in the first 35.

It stings, it sucks, for UVA fans, for whom Saturday was a coming-out party of all coming-out parties. The atmosphere was crazier than had been expected, and we expected it to be insane. And the game, for 35 minutes, went the way it was supposed to, the opponent getting in some early body blows, Virginia responding in the middle rounds, dominating, and setting up the big finish, either a technical knockout or a win on points.

You can’t account for a team that couldn’t throw it into the ocean from three for 35 minutes suddenly closing its eyes and not missing for the final five.

Doesn’t make it any easier for UVA fans to process what happened from 8:50 p.m. on Saturday night. It had been so long since the good guys had lost that it still might not have sunk in for some. Did that really just happen?

Doesn’t mean that folks need to go jumping off the bandwagon. This team was going to lose a game, will lose another game, might lose a few more before the season is over. That’s the reality of life in the ACC.

Talking with players and coach Tony Bennett after the game, you can tell that it hurts, but it hurts the right way.

They’ll learn something about themselves from tonight. It might be that, hey, sometimes s–t happens, sometimes a team just goes bananas from long range, and you have to move on.

Eyes still on the prize. The games that matter most are the ones played in March. Everything you do now is to get there to be in a position to play meaningful games toward a championship.

This UVA team is a championship-level team. Nothing about what happened from 8:50 p.m. on changes that fact.

One other thing we learned Saturday: UVA Nation is a championship-level fan base. Don’t let what happened from 8:50 p.m. on change that. Capiche?