beta bridge speaks mike london will save his job
Sports

Beta Bridge speaks: Mike London will save his job 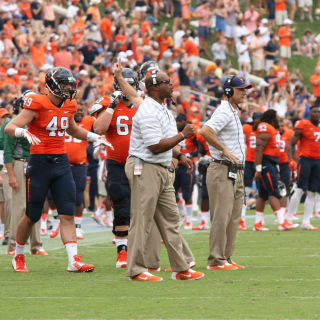 Doug Doughty at the Roanoke Times pointed out on Twitter today that the last time UVA students repainted Beta Bridge to call for the sacking of the football coach, in 2007, Al Groh’s Cavs responded by winning seven straight games.

So there you have it, folks. Beta Bridge has spoken: Mike London will save his job.

Call it Beta Bridge Magic. If you’re invoking the ghosts of 2007, it had to be magic that saved Groh’s job.

That winning streak, without a doubt, had to be the luckiest damn winning streak of all time. Four of the wins were by one or two points.

A fifth win in the streak, a five-point victory over Georgia Tech, was helped along by a fourth-quarter muffed punt.

The luck ran out in a tough loss at N.C. State on Oct. 27, but Virginia went out and won its next two, one of them another one-point win, over Wake Forest, the other a head-scratching 48-0 shellacking of Miami in the Canes’ final home game in the Orange Bowl.

So that was nine wins in 10 games for a team that laid a rotten egg in a 23-3 season-opening loss to a Wyoming team that would go on to finish 5-7.

The kids with their paint knew that loss was ugly, that the Cowboys were that bad, and that change needed to be in the offing.

Beta Bridge disagreed, and had Virginia get every break, bounce and other bit of good luck it could muster to save ol’ Al his job.

If you have a notion that Beta Bridge was trying to stave off the steaming river of raw sewage that would be the Mike London era by aiding and abetting the Al Groh side of the historical ledger, well, you may be onto something there.

Which could mean that the winning streak that is to come now that Beta Bridge has been engaged in the effort is only going to come to fruition because the next next coach is even worse than the current guy.