Bennett on NCAA Tournament: ‘No one wanted it to end this way’ 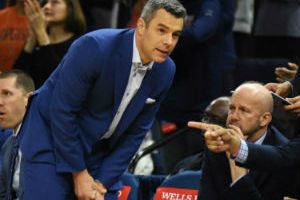 Virginia fought back from a midseason slump to earn the second seed in the 2020 ACC Tournament.

The season ended, like last year, on a lengthy winning streak, but this year, there were no nets cut down at the end of it all.

“No one wanted it to end this way, but in light of all this uncertainty and people who would be put at risk, I support and understand the NCAA cancelling it,” Bennett said in a statement posted to Twitter on Friday.

A day earlier, the ‘Hoos were in Greensboro for a scheduled 7 p.m. tip in the ACC Tournament quarterfinals against Notre Dame.

That stretch started with another OT win, 65-63 at Wake Forest on Jan. 26, in a game that Virginia trailed by double digits in the second half, after having lost four of its last five prior to the trip to Winston-Salem.

And that’s how things will end. Virginia was at a shootaround Thursday morning when Florida State and Clemson were in the Greensboro Coliseum preparing for the first of four tournament quarterfinal matchups, when the conference pulled the plug, as other conferences and eventually the NCAA did the same on the 2020 postseason.

The cancellation means the end of the college careers of 2019 NCAA Tournament heroes Mamadi Diakite and Braxton Key, the team’s two seniors.

It also means that, effectively, Virginia will enter the 2020-2021 season yet again as the reigning, defending national champs.

Which is nice, but, yes, everybody involved would rather have played the games and seen a 2020 champ crowned.

Virginia wouldn’t have been a tourney favorite, as it had been the past two years, but the consensus, from a review of several of the top-rated bracketologists, had the ‘Hoos set to enter NCAA play next week as a #6 seed, and had they been able to make a run in Greensboro, going as high as a four would not have been out of the realm of possibility.

“The incredible excitement of the NCAA Tournament for all the teams, fans and spectators is one of the best things in sports,” Bennett said, getting it only slightly wrong.

“I feel for all the young men and women who had their college careers cut short and the experiences they will miss,” Bennett said. “It is important in these circumstances for us to consider the bigger perspective and act toward the greater good.”