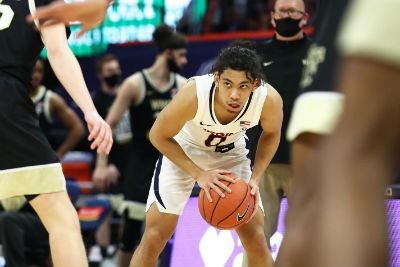 Kihei Clark, at 5’9”, getting a pass in the post, his back to the basket, drop-stepping, facing up, dishing to a cutter, to the perimeter – that’s so basketball in 2021.

Basketball is so different from what you saw in the 1970s, 1980s, 1990s – guards dumping the ball inside to a big, who ideally would take the pass and shoot from five feet or closer, or if he was doubled kick it back out to the guards for an open jumper.

Now the offense comes when a little guy like Clark either dribble-penetrates and kicks it back to a Houser, a Huff or a 6’9” Trey Murphy III, or just straight up takes his 5’9” of fury into the post like he’s channeling Ralph Sampson.

“Didn’t do that as much last year, but you know, you always look at your personnel and say, how can we, and it is a bit unconventional, but we’re different this year with who can space the floor and who can go inside,” UVA coach Tony Bennett said.

Bennett has been using Clark more and more in sets that have him flashing into the post to get an entry pass, and Clark is showing surprising skill and feel.

He’s freed up to be able to do so because Bennett has been using freshman Reece Beekman as Clark’s running mate in the backcourt a good bit of late. Beekman, a Top 50 recruit at point guard, is more than capable of running the offense at the point when Clark is in the post.

Bennett attributes the strategy to his time as a grad assistant at Wisconsin under Bo Ryan.

“He had an offense he called the swing, and it was inverted a lot. A lot of times the guards touched the ball in the post and made some plays for themselves and others,” Bennett said. “At times that’s effective, and you think, well, Kihei is obviously undersized, but he’s done some good stuff in there. And it’s just kind of what the defense gives you. And it’s sort of game to game.”