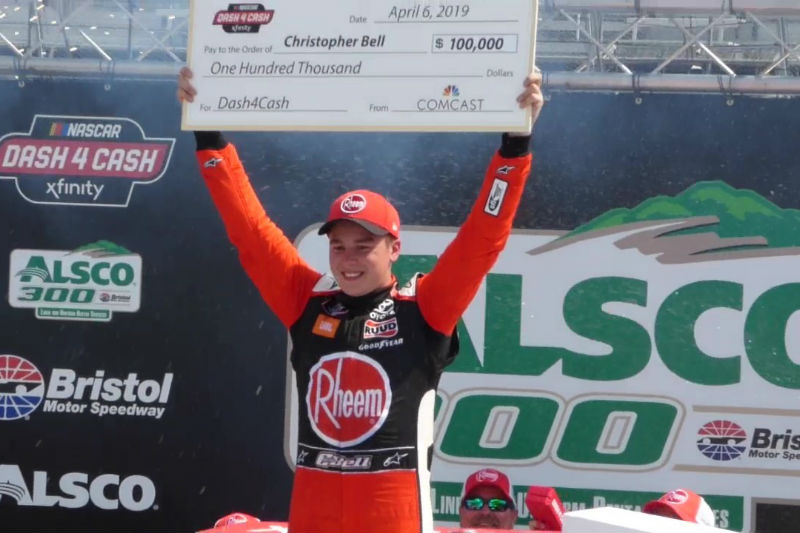 It wasn’t until late in stage three that the pieces began to fall into place for Joe Gibbs driver, Christopher Bell.

Bell qualified eighth for the ALSCO 300 on Saturday afternoon but the Rheem Toyota driver made his move for the top spot with about 25 laps to go.

One reason for Bell’s late blooming performance was that the young driver “got mired back in traffic,” but Bell admitted that he made a decision and stuck with it until the stage three.  “I was really, really fast,” but “I made the decision to either pass, go three wide or crash, so I played it safe.  I really got nervous with 30 to go.”

Bell’s crew chief, Jason Ratcliff said following the race that although the team made adjustments early, “at the end of the second stage, we finished third and we got back up to the front fast,” replied Ratcliff. “The track changes quickly and it’s pretty warm out today, but at the end of it, we really didn’t do a lot to (the car).

The winning crew chief commented that the track at Bristol today was probably the best he has seen. “It was real good,” replied Ratcliff. “”Don’t get me wrong, Bristol is always good, but today it was real good.”

Pole sitter Cole Custer spent most of the afternoon fighting off Chevy driver, Tyler Reddick. The Stewart-Haas /Haas Automation driver fought back and forth with Reddick, dropped back in the field and raced Reddick to the front of the pack but could not overcome the gap between Bell and the rest of the field.  Custer would finish third.

Meanwhile, Reddick continued to push forward and closed the gap between his Camaro and Bell’s Toyota. Reddick struggled with older tires to keep pace with Bell, relegating the Dolly Parton sponsored car to a second place finish.

Left out of the mix and a chance at the win was Justin Allgaier in the #7 Chevy Camaro.  Allgaier took Stage One and Stage Two victories in the ALSCO 300 and was one of five drivers who led laps on the afternoon but bad luck and a mechanical issue and ensuing accident cost the Armour Chevrolet/JR Motorsports Camaro as Allgaier finished 30th.

Bell was the recipient of a check for $100,000 dollars in the Xfinity Dash 4 Cash program and qualifies for the next Dash 4 Cash round in Richmond next week. Bell told the media he wasn’t sure how he was going to spend the $100,000 dollars.  “I need to see how much I get of it first.”

The Joe Gibbs driver added that the Gladiator sword presented to him in Victory Lane will “go up in my room,” adding that he has seen crew chief’s Jason Ratcliff’s sword “sitting in his office for over a year.”

For Ratcliff and the Rheem team, they are high on Christopher Bell and his talents. “He’s super talented, that keeps me and the team super motivated.” Christopher is a great guy on and off the race track.”

“Winning is fun too.”

The NASCAR Xfinity Series returns to action next week in Richmond, VA on April 12th at Richmond Raceway.