Believe it! You’ll find drive and talent in minority students 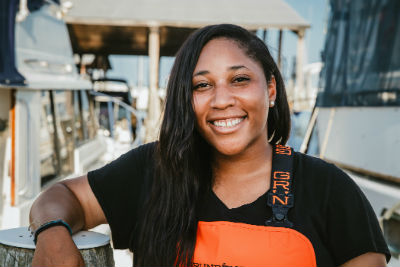 As a native of Maryland’s Eastern Shore, my rural upbringing drives my enthusiasm for conservation, restoration and stewardship of the Chesapeake Bay.

From a young age, I understood our responsibility to protect our coastal communities and knew I wanted to be a part of the solution. But, over time, even my strong passion would be challenged by the racial stereotypes and microaggressions that I felt while pursuing an environmental career.

There was one moment, though, that changed my life forever.

Recently, I saw a study published in Educational Researcher that put that moment in context. The study analyzed 5,600 Black, Latinx and white students who switched from a S.T.E.M. (science, technology, engineering and math) major before earning a degree. According to the study, data showed that more than two-thirds of those students were Black or Latinx.

Some may think those students lost interest or determined that they lacked the academic ability to compete in a S.T.E.M. major.

But as an African American woman with both a degree and career in S.T.E.M., I don’t automatically assume these were indecisive students. Instead, I think, “Wow! That’s 4,321 ideas, conservation efforts, environmental advocates, innovations, researchers and multimillion-dollar businesses that could have changed the current status of our planet. That’s 4,321 minority students who gave up on S.T.E.M. to pursue something else. How could that have happened?”

As I reflect on that, I can’t help but think of my own education and how close I came to being part of that very statistic. In 2015, I was taking summer classes to help lighten my academic schedule for the upcoming college semesters. I struggled with anxiety while balancing academics, the student-athlete lifestyle and my personal battle with diagnosed but mismanaged attention deficit disorder. Despite these challenges, I was both managing my coursework and being a good athlete.

One day before a chemistry lab, my coaches and athletic academic staff had a meeting with me about my major. This wasn’t the first time. According to them, they had seen me struggling long enough and came to the conclusion, based on my personality, that communications was a more suitable major for me. Then they handed me a list of communications jobs on which “movie theater manager” appeared first.

As my anger prevented me from reading the rest of the list, I sat in that chair, eyes filling with tears of pain and disbelief. People who were supposed to support me in all of my athletic and academic aspirations, people whom my parents and I trusted enough to commit to that institution, thought that even with a degree from their university my options were confined to this limited list before me. They thought so little of me and my abilities that they wanted me to make a decision that would impact the rest of my life based on their own abandoned hope for me. They were telling me I should abandon pursuing the career of my dreams.

I left that meeting unraveled by the sense of unworthiness that started to consume me. I called my mom, scared at the thought of how upset she would be when I told her what happened. But she was calm. She encouraged me to do what made me happy despite their opinions and to pursue my passion. Even though I felt defeated, I pushed through. It would take me years to heal, unlearn and unhear the words of that meeting. That moment of motherly encouragement would fuel not only my marine biology degree, but it would be the catalyst for all the things I love and create today.

It would take encouragement from not only family and friends but also from pivotal mentors within my career to make see and believe in my own potential in my science field.

And that makes me wonder, how many other minority students have faced similar challenges? How many of those 4,321students were unsupported in their time in S.T.E.M.? How many of them were told that they weren’t up to the challenge, weren’t smart enough or disciplined enough to be in these spaces? And what would our science fields look like today if every one of those people, regardless of race, had persevered?

So, I encourage you to believe in all people around you: your employees, coworkers, friends and anyone who may come to you with a vision for their life. Help people see the abilities and gifts that they may not even see in themselves. Speak hope into their work, ideas and innovations, because you never know what your words could help create.

Imani Black has been working in the shellfish aquaculture industry in Maryland and Virginia for the last five years. She recently launched Minorities in Aquaculture, a nonprofit organization that aims to educate minority women about the restorative and sustainability benefits aquaculture, while also promoting a more diverse and inclusive industry. Her views do not necessarily reflect those of the Bay Journal. This article first appeared in the Bay Journal and was distributed by the Bay Journal News Service.