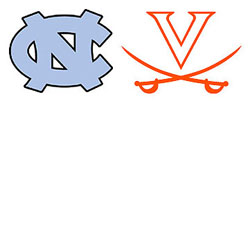 First play from scrimmage: North Carolina quarterback T.J. Yates finds Dwight Jones out in the left flat for what looked to be about a 10- to 12-yard gain. Then Jones breaks the tackle and streaks past the Virginia secondary for what turned into an 81-yard touchdown.

First play of the game, and UNC is on the board. It didn’t get much better for the ‘Hoos after that.

“It takes the wind out of your sails,” said UVa. coach Mike London, whose team lost 44-10 to its rivals on Homecoming, ending a 14-game home winning streak against the Tar Heels, and bursting the bubble on what had been as of a couple of weeks ago a promising first season for the new UVa. head coach.

Virginia (2-4, 0-3 ACC) has clearly taken a step or two back in the wrong direction after a September that saw the Cavs post wins over I-AA Richmond and VMI and a close 17-14 loss at then-nationally ranked Southern Cal.