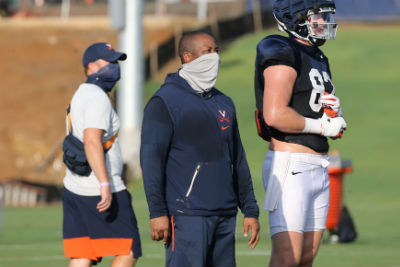 You don’t look forward to having to replace a Joe Reed, a first-team All-America kick returner, who was good for 33.2 yards per return last season.

“We’ve got Shane Simpson. We’ve got Tavares Kelly. We’ve got Billy Kemp. Got Paris Jones. Right now, we’re still trying to figure it out. We’re close to figuring it out,” Brumfield said.

Simpson, a grad transfer from Towson, was an FCS All-American at Towson in 2018, though he’s still trying to work his way back to 100 percent after having his 2019 cut short by a knee injury.

Kelly, a junior who was a track star as a prep, is the first among equals at the moment, according to Brumfield.

The situation at punt returner is also in flux.

Junior Billy Kemp would be the incumbent. Kemp averaged 6.0 yards on 23 returns in 2019.

But then there’s the prospect of throwing Simpson or another grad transfer, D’Angelo Amos, who has five career punt return touchdowns and averaged 16.6 yards per return in three seasons at JMU, where he was also an FCS All-American.

“Right now at punt return, we’re really just trying to just figure it out,” Brumfield said. “We’re giving guys as many reps as possible because, you know, we all know what Shane did at the college he was at, we all know what D’Angelo did at the college he was at, with five touchdowns, and Billy Kemp is very good as well. So, still trying to key in on that one.”

There is less flux, at least on paper, in the kicking game. Virginia returns its incumbents at the three kicking positions – Brian Delaney at placekicker and kickoff, Nash Griffin at punter.

The wrinkle is that Delaney, a senior, is pushing Griffin, also a senior, for the starting job at punter.

But according to Brumfield, Delaney wants to be the lead guy across the board.

“He wants to punt, but Nash is also competing as well, and he wants to punt. They’re doing a great job competing with each other and pushing each other. And Delaney is doing a good job kicking and doing the field goals,” Brumfield said.

Delaney was 20-of-24 on field-goal tries in 2019, with two memorable field goals in the fourth quarter of the 39-30 win over Virginia Tech in November, a 25-yarder that tied the game, and a 48-yarder with 1:26 to go that put Virginia ahead to stay.

Brumfield isn’t worried that Delaney would be stressed if he were to be the lead guy on all three kick units.

“People have done it before, obviously, but it definitely is tough,” Brumfield said. “It’s a little strain on your leg, but in all actuality, he does it pretty much every day in practice anyway. Because if he’s not the starting punter, he’s the backup punter, so he has to get practice plenty regardless. And then when we go into games, you know, he has to warm up being a kicker, field goal kicker, kickoff kicker and, and a punter as well. So, he’s kind of doing those things already anyway. I know for mental standpoint, it is a little more mentally draining, but I think it’s something he could do. If he wins that job, he’ll be good at all three of them.”