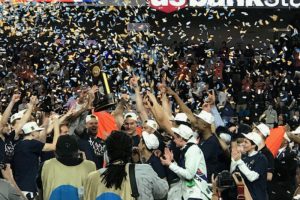 The Naismith Memorial Basketball Hall of Fame and Gazelle Group confirmed the scheduling today in an announcement of a season-opening multiple team event taking place on Nov. 25 and Nov. 27.

Bubbleville Pod One will tip-off Wednesday, Nov. 25 and will include UVA, Florida, Maine and Saint Peter’s.

Two days later, all four teams will play a second game with Florida taking on Virginia and Saint Peter’s taking on Maine. Final game schedule, game times and television broadcast details will be released at a later date.

The Naismith Memorial Basketball Hall of Fame and Gazelle Group are collaborating to produce multiple college basketball games at Mohegan Sun from Nov. 25 through Dec. 5, and have named the space Bubbleville.