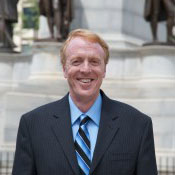 State Sen. George Barker, who represents parts of Fairfax and Prince William, introduced legislation last year that would allow people who have been in abusive dating relationships to obtain a protective order. Currently, Virginia does not allow someone in such a situation to seek a protective order unless the victim lives with the abuser.

“Virginia has turned a blind eye to people who are threatened.” Barker said. “Our state is in poor company, being just one of eight states not allowing people in abusive relationships to file for this protection. This bill is a major step in sharply reducing domestic violence in Virginia.”

“I hope the Commission will do the right thing and put their considerable weight behind protecting those in dating relationships,” Barker said. “Too many people, and most among them are young, are left unprotected because our laws are not strong enough. I hope my colleagues in the Senate and House of Delegates will join me in making sure that changes. If the Crime Commission and the Courts Committee do not move the bill forward later this year, I will reintroduce legislation next year. The safety and lives of Virginians in abusive dating relationships are too important not to do so.”