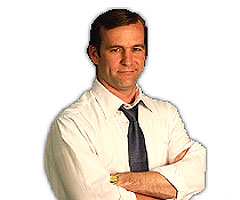 One of the major parties, Sixth District congressional candidate Stuart Bain says, wants to tax and spend. The other “wants to spend, but they don’t want to tax.”

“I’m a proponent of smaller government across the board. I don’t think big-government solutions work. I think we need to take a real strong look at how we can actually shrink our federal government back into the box that the Constitution had drawn around it to prevent it from becoming what it is today,” said Bain, a Marine Corps veteran and Roanoke native who decided to run for Congress after “taking a look at the economic issues that are challenging my generation and deciding that I really don’t want to see my children have to foot the bill for my generation’s poor choices.”

A central tenet to his campaign platform is the Fair Tax – a proposal to eliminate taxes on income in favor of the institution of a national sales tax. Proponents of the system proposed tout how it is based on consumption and thus moves away from more regressive forms of taxation, but critics charge that the sales tax is the most regressive of all in terms of its greater impact on lower- and middle-income workers and families.

Bain, calling himself “the Fair Tax candidate” in the Sixth District race, said the idea is to encourage savings and investment.

“By doing that, the Fair Tax will create jobs and additional wealth for the country nationwide,” Bain said.

The battle against Goodlatte will be “an uphill climb,” Bain acknowledges.

“He is an entrenched incumbent. He’s been there 18 years. He has quite a big warchest that has built up over those 18 years. It’s going to be hard to compete with that. Our focus right now is getting people to understand that this is a fight worth fighting and that we need their help to win,” Bain said.