The Augusta County Sheriff’s Office is investigating a burglary in Fishersville that may be linked to a second burglary in Staunton.

On May 5, a deputy with the Sheriff’s Office was dispatched to the Hornet Car Wash at 28 Wilson Lane, Fishersville, for the report of an alarm. Upon arrival, the deputy noted that a machine had been tampered with. Further investigation  revealed that the business had been forcefully entered.

Video surveillance shows a burgundy Chevrolet Tahoe with Tennessee plates (480-YJL) present at the time of the burglary. Of particular note is a large “Punisher” sticker affixed to the rear glass. Earlier footage from the evening before shows a white male operating the Tahoe, with a white cargo style trailer in tow.  It is believed that a passenger, possibly a female, is present in the vehicle at that time.

It is also believed that the same vehicle and suspects are involved in a burglary that occurred in the City of Staunton. If have seen the vehicle or male suspect, or know his current whereabouts, contact the Augusta County Sheriff’s Office at 540-245-5333 or Crime Stoppers at 800-322-2017. 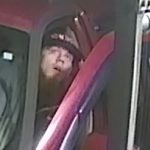 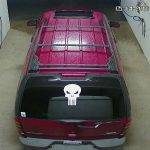