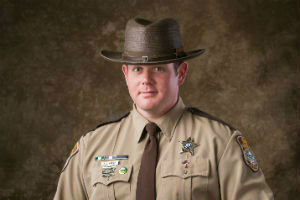 A collection drive for local National Guard members deployed to Washington, D.C., led by Augusta County Sheriff Donald Smith is now off, a day into the goodwill effort.

Smith, in a release sent out by the sheriff’s office, said the announcement of the collection drive on Wednesday led to “numerous concerns within the community about whether or not the government has provided soldiers with adequate supplies.”

“Our understanding is that the intent of the supply collection was to boost the morale of those deployed while they serve away from their loved ones,” Smith said.

The sheriff said his office had been contacted on Wednesday by the Harrisonburg unit of the Virginia Army National Guard to be a collection point for donations for area soldiers.

Seemed innocent enough, but then, yeah, when you think about it, it wouldn’t be a good look for the National Guard to have to go asking for donations.

Smith said the items already donated will be delivered to the local National Guard unit.

“On behalf of the Augusta County Sheriff’s Office, I apologize for the confusion and any inconvenience this may have caused. Thank you for your continued support of this agency, our staff, and the community,” Smith said.