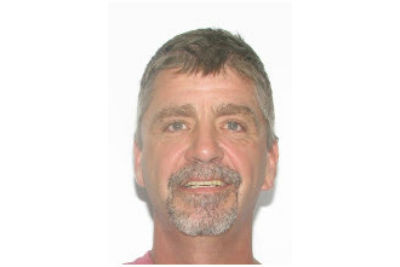 Edward Ray Garrison, 47, was able to flee after a two-mile pursuit that ended when Garrison wrecked his 2003 Ford Fusion into a ditch near Eastside Highway and Northwood Drive.

Deputies had encountered Garrison in responding to a call for a stationary suspicious vehicle in the 100 block of Court Circle off Eastside Highway in the Dooms area of Augusta County at 12:43 a.m. Tuesday morning.

Deputies arrived in the area of Court Circle at 1:03 a.m. and made contact with a male, who was sitting in a blue 2003 Ford Fusion. Upon making contact with the driver, the male gave the deputies false information about his identity, and while deputies were attempting to identify the male via dispatch, at 1:11 a.m., he fled the area and traveled north on Eastside Highway with the deputy in pursuit.

Garrison was found to be wanted on two probation violation warrants from the City of Staunton.

After wrecking his vehicle, Garrison fled on foot from the crash and was last seen wearing blue jeans, a gray sweatshirt and a ball cap.

Augusta County deputies, assisted by the Virginia State Police, searched the Northwood subdivision, but were unable to locate Garrison.