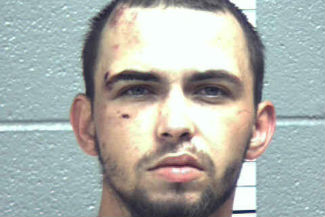 A Staunton man is in custody after a pursuit in Augusta County led to a crash, a fight with a sheriff’s deputy and ultimately an arrest.

Johnathan Lee Coffey, 22 of Staunton,  was transported to Augusta Health and treated and released for injuries he sustained in the Friday evening incident.

Coffey has been charged with felony eluding, felony assault on a police officer, obstruction of justice, speeding, and driving on a revoked license.

Two passengers a vehicle struck by Coffey, a 30-year-old female Augusta County resident and a 25-year-old male, were transported to Augusta Health with minor injuries, according to law enforcement.

The incident began at 7:53 p.m. on Morris Mill Road in Augusta County when a sheriff’s deputy observed a black 1998 Honda Civic heading west toward Frog Pond Road. The deputy clocked the vehicle at 62 mph in a 45-mph zone. As the deputy turned around on the vehicle to attempt a traffic stop, he noted smoke and skid marks on Frog Pond Road going toward Churchville Avenue.

From approximately a half-mile away, the deputy could see the vehicle speeding away on Frog Pond Road. The deputy activated his lights and sirens and observed that the vehicle turned onto Route 250/Churchville Avenue and had lost control and entered a ditch on the side of the road.

After the driver of the Honda disregarded several stop signs in neighborhoods and wound up on West Beverley Street heading east at 50-60 mph, the deputy terminated due to the suspect running a red light.

The deputy deactivated his lights and siren but observed that after taking a right turn on Hays Street from West Beverley Street, the suspect vehicle appeared to slow and appeared to be having mechanical issues. The deputy followed the vehicle at a safe distance without lights and siren activated and observed the Black Honda take a right on Montgomery Avenue, and then a left onto Lacy King Way.

When the deputy got to the intersection of Lacy King Way and Middlebrook Avenue, he observed that the Black Honda had struck a white 2005 Honda Civic that was traveling on Middlebrook Road. The deputy arrived on the scene as the suspect was attempting to exit his Honda and flee on foot, and the deputy attempted to apprehend him.

After a physical struggle and an attempt at a Taser deployment, the suspect assaulted the deputy and fled on foot until he was engaged again by the deputy after a foot chase. The deputy was assisted in apprehending the suspect by a male who was a passenger in the white Honda Civic that the suspect had struck.

After the arrival of an additional deputy, the suspect was taken into custody without further incident.

Further charges against Coffey are pending.