Deputies search for Georgia murder suspect, find something in the trunk 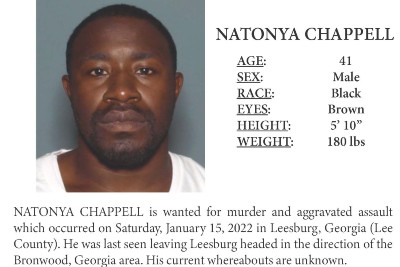 A suspect in a pair of Georgia murders may be in Augusta County, after sheriff’s deputies located a vehicle stolen from the scene of a Jan. 31 homicide that had been abandoned in Greenville.

“The Augusta County community should be aware that Natonya Chappell, who is currently wanted for murder out of Georgia, has not been apprehended,” Augusta County Sheriff Donald Smith said.

“Chappell’s whereabouts are unknown at this time, however, the ACSO is being led to believe that he is still in the Georgia area. Please see the attached flyers, familiarize yourself with Chappell’s appearance, and if you see anything suspicious, call us immediately,” Smith said.

A second man, Nakia Lanard West II, 26, of Albany, Ga., was arrested as sheriff’s deputies began to examine the abandoned vehicle, which had been left in the middle of the roadway in the 500 block of Stover School Road, locked, with its headlights on, around 6:20 p.m. Tuesday.

The black four-door Hyundai Elantra, displaying Georgia temporary tag # C0521643, had been reported stolen on Monday from the scene of a homicide in Dawson, Ga.

Deputies located no one around the vehicle and alerted area residents by reverse 911. Deputies made contact with numerous homeowners in the area and also searched numerous homes looking for Chappell.

A K-9 team was deployed to the area and deputies checked the adjacent farmland and woodland for signs of someone on foot.

At 7:49 p.m., before towing the suspect vehicle, deputies opened the trunk on the vehicle and discovered West hiding in the trunk, holding a handgun. West was arrested without incident and transported to the Augusta County Sheriff’s Office.

There has to be more to this story, namely, how West ended up in the trunk of a car in the middle of nowhere in Augusta County, if he decided of his own volition to hide in the trunk, if so, why, and if not, what are investigators not telling us.