Atlanta takes De’Andre Hunter with No. 4 pick in 2019 NBA Draft 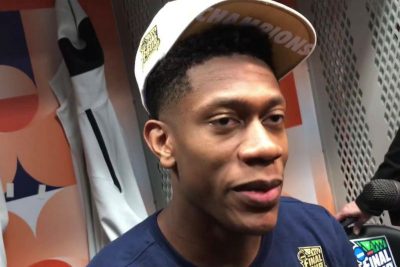 The Atlanta Hawks decided that UVA star De’Andre Hunter is their man, and made the first big play of the 2019 NBA Draft to get him.

Hunter is the best two-way player in the 2019 draft class. The national defensive player of the year as a redshirt sophomore, he also shot 52 percent from the floor and 43.8 percent from three-point range as Virginia played its way to its first national championship in basketball in April.

The Hawks will pair Hunter with Trae Young, the No. 5 pick in the 2018 draft and one of three finalists for the 2019 Rookie of the Year award after averaging 19.1 points and 8.1 assists per game, as the foundations of the roster going forward.

Cam Reddish, the No, 10 pick in Thursday’s draft, will push for playing time in the backcourt, along with Huerter and UVA alum Justin Anderson (3.7 ppg in 2018-2019), with another Maryland product, 7-footer Alex Len (11.1 ppg, 5.5 rebounds/g) getting bench minutes in the post.