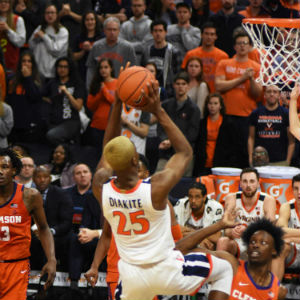 Mamadi Diakite used the spring of 2019 to get a handle on what NBA execs thought of his game, then worked to address what he learned when he returned to Virginia for his redshirt senior season last fall.

Now, on the eve of the delayed 2020 NBA Draft, Diakite is holding out hope that he will hear his name called.

A draft call might not be in the offing, based on our scan of the various draft prospect websites, the consensus being that he is at best a late second-round pick, more likely an undrafted free agent.

No doubt the lack of a traditional walkup to the draft will hurt Diakite, a 6’9” power forward who has been NBA-ready on the defensive end since his junior season, utilizing his 7’3” wingspan to become an elite rim protector (2.0 blocks per 36 minutes) and his mobility to be a plus defender in the pick-and-roll.

His ability at 6’9” to stretch the floor would be a plus at the NBA level, where fours have to be able to spot up and pick-and-pop.

Where he will have to improve is in the post. The scouting reports you read on Diakite have him pegged as mostly a jump shooter, putback artist and rim runner, solid from three-point range for his size, scoring 1.19 points per possession at the rim (per Synergy), but putting up an ugly 0.84 PPP on post-ups.

Which is to say, you’re not getting an offensive juggernaut in Diakite, probably justifying what you’re seeing about him being a UFA when all is said and done tomorrow night.

Diakite projects to be depth up front, a guy who can anchor your defense on the second unit, defending either post position, taking opponents’ second unit out of pick-and-rolls, and he’s not a liability on the offensive end when he’s out there.

For a guide on what Diakite can be for an NBA team, you can look at what he did for the 2019 national title team.

Diakite was a key contributor as a role player, and stepped up big-time in the NCAA Tournament, averaging 10.5 points, 8.2 rebounds and 2.7 blocks per game, shooting 60 percent from the floor.

At the absolute least, he gives you a few solid minutes a game, a guy who will make your bigs work and get better in practice, and a top-notch young man as a locker-room presence.

I don’t expect that we’ll hear Diakite’s name called tomorrow night, but I’d be surprised if somebody doesn’t snatch him up quickly to bring to camp after the last pick of the night is called.