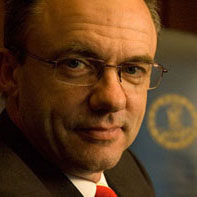 House Democratic Leader Ward Armstrong is sounding off on a move by Gov. Bob McDonnell to hire a private consultant to help sell his controversial plan to sell off Virginia’s 332 ABC stores.

“At a time when people across the state are looking for leadership on jobs, education, transportation and a host of other issues, Gov. McDonnell appears to be spending valuable time, and now valuable money, trying to resurrect a political priority that will not benefit the people of Virginia in any way,” Armstrong said in a statement.

PFM Group has been contracted to consider approaches for the state to privatize its state-owned liquor stores. McDonnell, a Republican, has said privatization could generate up to $500 million that could be earmarked toward transportation improvements.

A Washington Post report on similar moves in Iowa and West Virginia netted each of those states less than $20 million in upfront monies.

Armstrong and other Democrats are seizing upon the numbers gap.

“I am having trouble explaining to my constituents why the governor believes we need to expand access to hard liquor, especially if doing so won’t even result in a long-term return on investment for Virginia taxpayers,” Armstrong said.