A year has passed since Virginia’s first national hoops title 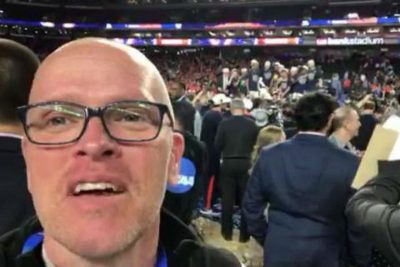 A year ago today, I was sitting a few feet behind Jim Nantz, looking up at the floor of the national championship game.

I’ll never forget how loud it was for the roughly two and a half hours as Virginia and Texas Tech dueled.

Or the confetti falling from above as De’Andre Hunter flung the final rebound toward the heavens.

I have some of that confetti in a Final Four bag in my upstairs studio. It is to be buried with me whenever it is that my soul leaves this realm for the next, along with the shoes that I wore that night, and touched the floor that the game was played on.

So much of that night is a blur.

I’m not from the generation of sportswriters that maintains strict impartiality when it comes to the games that I cover.

I grew up rooting for Virginia hoops, beginning in the late 1970s, and I hate to admit, but readily do, that a key reason I decided to attend the University of Virginia was the access to free student tickets to games.

From here forward, April 8 will be a special day, maybe, and I’m not exaggerating, more special than my own birthday.

I mean, great, I was born on June 22; that was going to happen anyway.