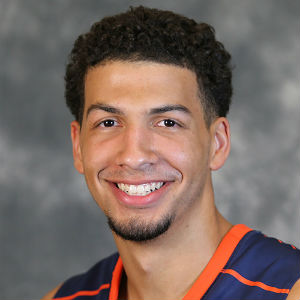 That’s what Anthony Gill brings, along with his post scoring, rebounding and interior defense.

“I think of the word joy in the journey with him, and he has great joy inside of his heart and just in his being, what he represents,” UVA coach Tony Bennett said. “I know he draws that a lot from just his perspective. He’s a strong man of faith, and that encourages me to see that.”

The faith side to AG came to the national spotlight when Bennett had a brief episode in Virginia’s opening-round NCAA Tournament win over Hampton last week. A light-headed Bennett stumbled on the sidelines, and as the UVA bench scrambled to help their fallen coach, Gill stood with his hand on his coach’s shoulder, deep in prayer.

Asked about the moment after the game, the fun side of Gill was back on full display, with him quipping that his prayer must have “healed” his coach.

That story pales in comparison to the famous, actually infamous, story from last year in which Gill casually told a tale in a presser about how Brogdon eats raw onions as a snack, and an unsuspecting reporter ran with it as being true.

That fun side is a good distraction for an otherwise all business Virginia team that plays a tough, tough brand of basketball – the Pack-Line defense and mover-blocker offense are grueling for opponents as well as the Cavs.

Reporters at a pre-Sweet 16 press conference Thursday tried to have fun with the other ‘Hoos on the dais. One line of questioning brought up an odd article in Vogue this week about how Bennett is the NCAA Tournament’s George Clooney.

Bennett, for his part, wouldn’t touch the story with a 10-foot pole.

“I didn’t read the article. I don’t know,” Bennett said, trying to laugh off being the new Coach McDreamy. “Someone sent me a text and was messing with me and said they’re about to puke, that’s what they said. It was our tennis coach actually Brian Poland, so he’s always twisting the knife. But I didn’t read it. I didn’t read it and am not interested in reading it, really.”

Gill, not surprisingly, took the question and ran with it.

“You know, I’m not sure,” he said, pensively. “If anybody, I would say if somebody was going to play my life in a movie if that’s what you were asking me, if that’s what I got out of it, I would pretty much go with Denzel Washington, Will Smith, and any other like mainstream actor that girls love. That’s probably who would play me in a film.”

It will be hard to replace the redshirt senior’s production on the court when his time at UVA is done, but it might be harder still to find a replacement for what Gill brings chemistry-wise.

“I’ll be honest with you, when you see people who love life like that, who have a true joy about them, who have a perspective, to me that kind of passes understanding in some ways, and I love that, and I think it’s great,” Bennett said. “I’ve seen him be a mentor, influence our younger players, his peers, and of course we all have flaws, but that’s such a powerful thing. I’m the better for getting to work with him for coaching him on the floor for three years, but being with him for four years in his year he sat out.”