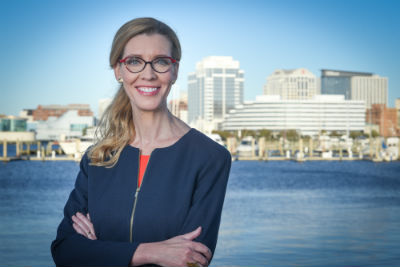 A defining moment in Andria McClellan’s career in business and, ultimately, politics, came as the dotcom bubble was about to burst.

It also just so happened to be her 30th birthday. Her husband, Mike, was planning a surprise party, but she couldn’t make it, because she had to lay off the staff at the small Northern Virginia tech firm that she was leading.

“That was the hardest thing I’ve ever had to do,” said McClellan, of Norfolk, who is running for the Democratic Party lieutenant governor nomination.

A 1991 UVA alum, her trajectory, to that point, had been pretty much a straight line pointing up – industrial sales and marketing for two Fortune 500 companies, leading roles in two tech start-ups.

To say that she picked up the pieces and made the most of things would be understating it. Mark Warner, as governor, tapped her to serve as chair of the Virginia Small Business Advisory Board, and her resume includes stints on several local and regional nonprofits and economic development boards – ahead of her running, and winning, a seat on Norfolk City Council, in 2016, and a re-election in 2020.

It’s that moment that had her shuttering the dotcom that stands out in the here and now – as Virginia, the nation, the world, faces the uncertainties of COVID-19.

The good news there: to this point, Virginia, fortunately, knock on wood, don’t want to jinx us, has fared better than most.

The unemployment rate is 4.9 percent, nearly two points ahead of the national rate, but that’s still almost double what it was pre-pandemic – and tens of thousands of Virginians are still out of work, others have replaced full-time jobs with part-time, and small businesses across the Commonwealth, particularly in the hospitality industry, are struggling day to day to keep afloat.

“We’re going to have a pretty tough economy for the next couple of years. And so, we have to be innovative in how we utilize resources,” said McClellan, who envisions her role as a lieutenant governor – which is a part-time position, the primary duty being to preside over the State Senate each January and February, occasionally into early March – as being a sort of chief engagement officer for the Commonwealth.

The idea here is having as many smart people on the task as you can get together is the best way to figure out solutions to the problems that we’re facing together.

“It’s great that you preside over the Senate. You have to break ties, that’s very important. You have to be there to fill in for the governor. I think anybody who is considering a candidate for lieutenant governor, I think you need to do so with a lens of is this person ready to step into an executive role,” McClellan said.

“I don’t know who’s going to be the governor, but I think I would make a great wingman to whomever that is, to help to attract business, as well as to attract the workers and the talent, because it’s not just a matter of, you know, bringing in a big Amazon to Virginia, it’s how do we get the talent here.”

To that end, McClellan has helped build a talent network at the local and regional level through Engage Norfolk, an annual event that she launched in 2016 that connects local and state political leaders, business and education leaders and private citizens.

“We’re connecting that human capital that exists in our community, and we’re helping people turn their passion into action to make our communities a better place,” McClellan said. “I think we have a lot of folks interested in public service. So as a state, I think we need to be trying to create more opportunities for people to connect the dots and put that human capital to work. That’s one of the things that I’d really love to focus on.”

There’s a bit of the young industrial sales and marketing whiz kid there.

There’s also something of the woman who had to face down what was next that led her to local government – and could serve her well in Richmond.

“The last person with local government experience to go to the lieutenant governor’s role is Tim Kaine. Now, I’m no Tim Kaine, but I do think that he’s one of the best politicians around, because he has that experience of understanding what it’s like to deal with your constituents at the grocery store and in the church pews and at your kids’ school parking lot,” McClellan said.

“I think having that background, and understanding what happens in Richmond at the State Capitol doesn’t always translate well to Main Street and City Hall, that there’s a lot of unfunded mandates and unintended consequences of well-meaning elected officials at the state level, being able to translate that, given my experience in local government, is important.”

One thing you don’t always think about with people who serve in government is that it’s not what CNN, MSNBC, Fox News portrays it as being – speeches, rallies, partisan bluster back and forth.

McClellan serves as the chair of the Hampton Roads Planning District Commission, 1.7 million people, 17 local government entities, a mix of big cities, suburbs, rural areas – and as McClellan pointed out, “lots of Republicans, lots of Democrats, and we all sit around a table, and we have to get things done.”

“As lieutenant governor, you don’t represent only the Democrats or only the Republicans. You represent the entire state,” McClellan said. “That’s what you do at the local level. That’s what you do in business. That is absolutely the mindset that I have. There’s been so much division in politics, for way too long.

“To the extent that I can create some sort of healing element to bring people together to get things done and focus on the middle of that Venn diagram of our lives, instead of the outer edges, I think that’s really, really important.”