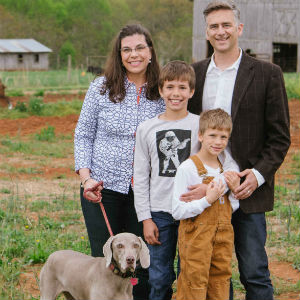 Sneathern enters the race for the Democratic Party nomination in the Fifth with the endorsement of Khizr Khan, the Gold Star father who gained national attention sparring with Donald Trump following last year’s Democratic National Convention.

“We need good people who will take a stand against hateful ideology.” Khan said, “I support Andrew Sneathern because we know he will stand up for those who do not have a voice in the Fifth District.”

Sneathern plans to deliver a positive message of inclusion and economic possibility for the Fifth District while insisting a new type of leadership will be needed to succeed.

“For too long the Democratic Party has sounded like it was talking down to us, or over us, but rarely listened to us. I think I can be an honest broker, and I’m going to start by listening,” Sneathern said.

In his career, Sneathern has served as a prosecutor in Missouri and Virginia, as well as a civil rights attorney for the general counsel in the U.S. Department of Agriculture, before starting his own law practice in Charlottesville. He was born on a farm just outside of a small town in southeast Missouri.

“Out of the seven kids that grew up on our farm, only two remain working the land that once was able to support every member of my family.” Sneathern said. “I understand first hand the problems that face much of our district.”