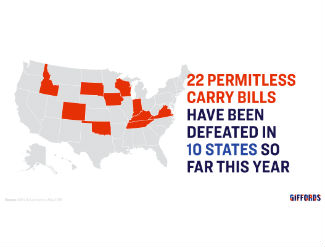 The newest edition of a biweekly report from Giffords Law Center to Prevent Gun Violence spotlights Oklahoma Republican Gov. Mary Fallin’s veto of a bill that would have allowed individuals to carry loaded firearms without a permit, training, or a background check.

In total, 22 permitless carry bills have been defeated in 10 states so far this year. Since the tragedy in Parkland, Florida, recent editions of Gun Law Trendwatch have shown that lawmakers across the country—particularly in states with traditionally weak gun safety records like Tennessee, South Dakota, and Iowa—are defying calls from the gun lobby and letting permitless carry bills—opposed by law enforcement officials, business owners, and communities—fail rather than proceed through the legislature.

“Since the horrific tragedy at Marjory Stoneman Douglas High School in February, state legislatures have listened to the demands of everyday Americans and beaten back dangerous gun lobby bills,” said Allison Anderman, managing attorney of Giffords Law Center to Prevent Gun Violence. “No matter how many campaigns the gun lobby wages to put more guns into the hands of more people at any cost, it can’t hide the simple fact that making it easier for dangerous or untrained individuals to carry handguns in public puts communities at risk. These lawmakers have shown courage by standing on the side of families and law enforcement to defeat legislation that would have made the gun violence epidemic even worse.”

A recent poll clearly shows a clear disconnect between the views of gun owners and the priorities being pushed by the gun lobby. The NRA’s top legislative priorities NRA at both the state and federal level, including federally mandated concealed carry, receive very low support from gun owners themselves. Governor Fallin noted in her veto that the permitless carry bill would have made it impossible for Oklahoma law enforcement to identify those carrying guns who had been properly trained and those who hadn’t.

These defeats of permitless carry bills follow a new wave of gun safety activity and engagement that builds on this year’s legislative session, where so far a number of states have passed lifesaving policies backed by Giffords. That includes:

This continuing success is further evidence that the gun violence prevention movement has maintained the historic momentum generated in response to the tragedy at Sandy Hook Elementary five years ago. In fact, since 2013, over 230 gun laws that make communities safer have been enacted in 45 states and DC.