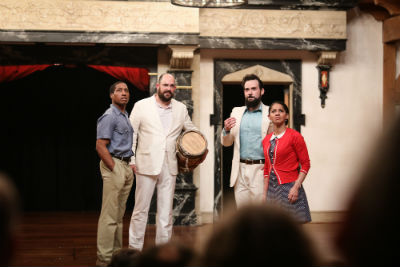 KP Powell, David Anthony Lewis, Ronald Román-Meléndez, and Constance Swain in Much Ado About Nothing. Photo by Lindsey Walters.

The videos, all seven of which were filmed in cinema-quality, will be distributed via a secure link with the first four films from the Actors’ Renaissance Season premiering online throughout this week.

“After ending public performances on March 15, in accordance with directives from the State of Virginia, ASC transformed our beloved playhouse into a soundstage and quickly started filming the existing repertoire of both our Tour and Ren Season troupes,” said Artistic Director Ethan McSweeny. “As the scale of the crisis emerged and the relevant professional unions created new guidelines, ASC realized that we had an unprecedented opportunity perhaps unique in the American theatre to digitally capture two ensembles worth of productions, or seven complete shows.  We’re going to release our celebrated director-less Actors’ Renaissance Season now, and follow that with our National Tour’s Spring Homecoming Season when it would have played on our stages.”

These digital offerings are provided under the name BlkFrsTV – a tongue in cheek reference to the company’s Blackfriars Playhouse, the world’s only re-creation of Shakespeare’s indoor theatre.

ASC will begin by releasing their smash-hit comedy, Much Ado About Nothing, on Thursday, March 26. This “Renaissance rom-com” features one of literature’s most famous quarreling couples, Benedick and Beatrice in a 1940s-inspired approach to the classic.

Later this week, ASC will release both Part 1 and Part 2 of Henry IV, bringing the entire adventure of the aging, inebriated knight Falstaff and young Henry V’s ascent to the throne to viewers’ homes from the stage of the Blackfriars Playhouse.

Finally, the hilarious Beaumont & Fletcher Jacobean comedy A King and No King will join the lineup. Full of murderous plots and zany romantic twists, this is a must-see for anyone who needs a laugh.

These shows make up the Actors’ Renaissance, ASC’s deepest dive into the Elizabethan era, when a 15-member acting company composed entirely of ASC veterans creates four productions in rotating repertory, without the aid of directors or designers.

“Each performance was shot ‘live’ before a limited audience of our own staff and fellow cast members,” McSweeny explains. “As a company, we self-quarantined early and rigorously practiced hygiene and social distancing so that we could do this with a sufficient degree of safety.”

“In keeping with the union rules, we’ll be sharing these shows with all of our patrons who purchased tickets to canceled performances and haven’t received a refund. Tickets for the videos will also be available for purchase by new audiences for the length of the original run,” notes Managing Director Amy Wratchford. “Our ticket capacity is limited to what the Blackfriars Playhouse could have held, so don’t delay purchasing your streaming ticket today.”

This BlkFrs TV line-up will be available to purchase on the American Shakespeare Center website. Patrons who purchase a streaming ticket will receive a secure video link and password.

Tickets begin at just $10. Much Ado About Nothing tickets go on sale today, with the other Actors’ Renaissance titles to follow in subsequent days.

“We’ve already been successful with this digitizing experiment. Our recent Facebook live stream presentation of the National Tour’s 90 minute A Midsummer Night’s Dream was seen by some 25,000 Facebook visitors, who streamed 180,000 minutes with an average audience of 1,500 households at any given moment,” adds McSweeny. “The performances we’ve captured over the last week will allow us to offer a much higher resolution picture and sound than that live stream, for what we hope will be the next best thing to being in a seat at the Blackfriars.”

In addition to the Actors Renaissance  season, the company will release the three productions from their 2020 National Tour: A Midsummer Night’s Dream, Imogen (aka Cymbeline), and Frank Galati’s adaptation of John Steinbeck’s The Grapes of Wrath.
The Tour, whose work traveling from Maine to Texas was canceled in the midst of university closings, returned home to Staunton earlier this month. ASC is also finding ways to provide its critically acclaimed educational resources to educators – and parents now home-schooling – while schools remain closed during the pandemic.