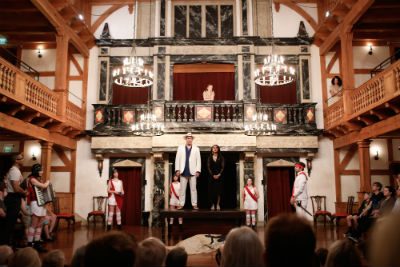 The American Shakespeare Center will be going live on Facebook Sunday at 1:45 p.m. with a special 90-minute adaptation of A Midsummer Night’s Dream.

If you’ve never seen live Shakespeare before, this is a wonderful opportunity to do so.

“This is a community effort, and it wouldn’t be possible without the incredible donated support of local filmmakers in the Shenandoah Valley who have considerably more expertise — and gear! — than ASC has,” ASC Managing Director Amy Wratchford said.

American Shakespeare Center will offer their work digitally, under the name BlkFrsTV – a tongue-in-cheek reference to the company’s Blackfriars Playhouse, the world’s only re-creation of Shakespeare’s indoor theatre.

“Normally, our audiences come to Blackfriars for an experience in the hand-made, the intimate, and the personal,” ASC Artistic Director Ethan McSweeny said. “But in response to this crisis, along with performing arts organizations across the nation, we are attempting to graft our ancient theatre practices with the latest streaming technology Facebook has to offer.

“We figure that if audiences can’t come to us, then we will go to them.  It’s a chance to pull up, in real-time, a chair to the virtual hearth, and join us at the beautiful Blackfriars Playhouse for a joyous, rousing, and energetic production by our spectacular National Tour Company.”

McSweeny noted that if the experiment works in terms of drawing audience, “it’s something we’d like to try again.”

“We hope that patrons and friends of ASC will tune in,” McSweeny said.

BlkFrs TV can be found on the company’s official Facebook page. Livestream dates and times will be posted to the company’s social media platforms, including Twitter and Instagram, along with ASC’s website, americanshakespearecenter.com; watch those spaces for further announcements.

The company is currently accepting donations to help them re-open with a full staff in June. The full statement on ASC’s closure can be read on their website. Supporters are encouraged to donate if they are able, or to purchase tickets to the upcoming summer season, and to share ASC’s story on social media so others can follow their leadership.