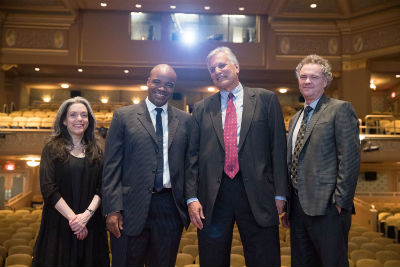 After more than 300 episodes that have reached millions of listeners over the last 12 years, BackStory, the American history podcast produced by Virginia Humanities, published its final episode today.

“Virginia Humanities is proud to have produced BackStory for the past twelve years. The staff, guests, and hosts have created a show that makes history not just interesting, but also relevant. Without an understanding of what came before us in human experience, we run the risk of plodding through the present and into the future with amnesia,” said Matthew Gibson, Virginia Humanities’ executive director. “BackStory has been a great antidote to that possibility and has helped listeners understand the importance of the past in shaping our future. The show’s accomplishments are many and I am happy we have ensured the public will continue to have access to every episode in perpetuity.”

“The Radio Years” of BackStory, 2008 – 2016, are available in the American Archive of Public Broadcasting (AAPB) – a collaboration between the Library of Congress and Boston public media producer WGBH. More than 55,000 historic public radio and television programs are available for streaming through the AAPB, with more on the way, including BackStory’s episodes from 2017 onward. BackStory is featured as one of AAPB’s special collections.

“All of BackStory will be preserved for posterity at AAPB,” said Alan Gevinson, Library of Congress project director for AAPB. “The series has consistently used audio innovatively to explore complexities of the American past and present, while offering ways for making sense of its stories that will be appreciated for generations to come.”

“The Podcast Years,” 2017 – present, continue to be available on BackStory’s website, but will also have a home on New American History, the latest digital humanities project led by BackStory host, Ed Ayers. New American History explores America’s past with the power of digital media. Its core projects are Bunk, a curated remix of contemporary online content, and American Panorama, an interactive digital atlas. Partner content is contributed by BackStory, the video documentary series The Future of America’s Past,  as well as others who share a commitment to innovative public history.

“We look forward to sharing the riches of BackStory for years to come,” Ayers said.  “The shows responded to current events and yet offer insights of enduring value and interest.”

Thanks to early and continued support from an anonymous donor and the National Endowment for the Humanities, BackStory reached diverse audiences with the latest and most innovative humanities scholarship.  Aligning around common missions, NEH supported BackStory with generous grants for production and creation of educational materials, while BackStory staged live shows in conjunction with the NEH for bipartisan offices.

BackStory has been downloaded millions of times every year by listeners around the globe. Through these partnerships, the entire catalog will continue to be available online for years to come.