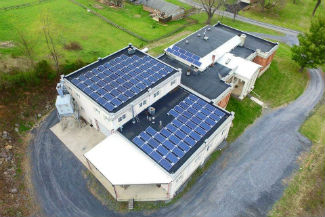 Taylor and Boody Organbuilders in Staunton has completed installation of a photovoltaic solar system to power their workshop. The 37kW, 109-panel system is expected to produce 46,251kW of power and offset approximately 75,885 lb. of CO2 emissions annually.

The company was founded in 1977, and in 1979 moved from Ohio to the Staunton area and bought a school building which had been unoccupied since the 1950’s. The company’s management had been considering solar for several years, and due to a confluence of factors, Business Manager Erik Boody decided it was time to make the commitment.

He chose Altenergy, Inc, to design and build the system, because of Taylor and Boody’s dedication to support local businesses and the recommendation of its co-founder George Taylor, who hired Altenergy to install a solar power system on his home.

“Solar is now so affordable, and when Altenergy helped us obtain low-interest financing, that was the clincher,”  Boody said. “We realized we would be crazy not to do it.”

A flat-roofed building added to the facility in 2004 provided the perfect platform and orientation for the solar system. The array is expected to supply nearly all the electric power required to operate the facility, and will complement the company’s dedication to green operation and recycling/reusing almost all the leftover materials from the construction of their instruments.

“Working with Altenergy was a great experience from start to finish,” said Boody. “They were extremely helpful and professional, and honored their commitments from contract through installation. I would recommend them to anyone.”

“The solar installation on this building went really well,” said Altenergy Master Electrician Matthew Huffman. “It’s nice working on a flat roof and we generally had great weather so the work progressed smoothly. Erik Boody and his employees really knew their building well. They were able to tell us what the walls were made of, where the attic access points were, and where the router and existing wiring were located, for example. This made the installation go really well. Erik also helped us unload materials with the company’s forklift.

“It’s neat to see such modern technology, like a solar system, being installed on such an old building.” From Cow Bones to Carbon Fiber. Taylor and Boody make nearly every part of these complicated instruments in-house, using a mixture of new technology and craftsmanship that has changed little in hundreds of years of organ building. Stateof-the-art CNC technology is used to make some of the parts, while the keys are made of cow bone, honed and polished in the Staunton facility. Trackers, which connect the key levers to the wind-chest, are traditionally made of wood, but Taylor and Boody organs built in the last few years utilize carbon fiber which is strong, light and uniform in construction.

“Organ building is a more than 500-year-old trade, and throughout its history builders have used the latest technology to improve their instruments,” Boody said. “We do the same— when there’s a technology that can produce better quality or save time, we will use it.”

The company is currently building Opus 74 for the St. Paul University Catholic Center and are under contract for instruments for the University of Notre Dame and Princeton University.

“We’re proud to be Staunton residents and business owners,” said Boody. “And we love to open our shop to tours and visitors. Now we’ll be able to tell the story of how we use solar energy to build these old-world works of art.”

About Taylor and Boody Organbuilders

The company was founded in 1977 in Middletown, Ohio by George K. Taylor and John H. Boody. Both partners learned the art and science of organ building through apprenticeships with masters of the craft. Taylor, a graduate of Washington and Lee University, was awarded a Ford Foundation grant to study organ building with Rudolph von Beckerath in Hamburg Germany. Boody, a University of Maine graduate, apprenticed with Fritz Noack in Georgetown, MA. Taylor and Boody were partners with noted organ builder John Brombaugh before relocating to Virginia. www.taylorandboody.com About Altenergy, Inc.: Founded in 2004,