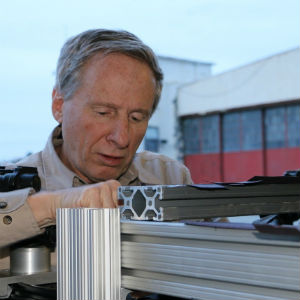 William Copenhaver, a visiting scholar from the Air Force Research Laboratory, Dayton, Ohio, prepares a test to evaluate the performance of a 6-inch StreamVane and measure the swirling flowfield it produces.

As a top-tier research university, Virginia Tech looks out beyond the campus to partner with some of the world’s top technology companies. Sometimes, however, the world comes to Blacksburg.

Such is the case with visiting scholar William Copenhaver, who for the last 36 years has worked for the Air Force Research Laboratory (AFRL) in Dayton, Ohio. A two-time alumnus, Copenhaver earned both his bachelor’s and master’s degrees at Virginia Tech, the latter in 1978; and he went on to earn a doctorate in mechanical engineering from Iowa State University in 1988. Since June 2015 he has been in Blacksburg working with Walter O’Brien, the J. Bernard Jones Professor of Mechanical Engineering.

As a researcher focusing on fan and compressor technology, Copenhaver applied for the visiting scientist program knowing exactly where he needed to be. “In our branch at AFRL, we have four Virginia Tech graduates and we know that the focus here is on developing turbomachinery that is distortion tolerant, so the connection to Virginia Tech is pretty natural,” he said.

Citing the university as one of the leaders in the field of propulsion research, Copenhaver submitted a proposal to spend six months in Blacksburg looking at the influence of distortion on propulsion systems. In November, as he neared the end of his term, he submitted a second proposa, to build upon the momentum of the first and help further develop a technology created at Virginia Tech called StreamVane.

“The proposals have to be a good connection for the Air Force and be connected to a university considered a leader in the field,” Copenhaver explained. “When I submitted my second proposal to stay an additional six months, I didn’t consider it very likely – it’s very difficult to get one six-month tour. To get successive proposals approved is very rare indeed. But the StreamVane technology represents a significant potential benefit to the Air Force, and my sponsors wanted me to maintain my momentum and continue my work.”

StreamVane is a patent-pending technology developed in 2012 by O’Brien and the Virginia Tech TurboLab research team.  It has the potential to drastically reduce time and costs associated with turbine engine inlet integration testing. As the Air Force and many civilian aviation industries move toward more-complex inlet designs for aircraft engines, more research needs to be done to show how those inlets affect the flow of air into and through engine and how that flow corresponds to aircraft stability and handling characteristics.

“You want to understand the influence of distorted inflow on fans,” Copenhaver said. “It’s important to know how propulsion systems operate in a very harsh inlet environment where there are a lot of swirling flows and pressure distortions. We want our propulsion devices to work just as well inside the airframe as they do outside, so we focused on how to make turbine engines operate better with more complex inlet flow fields.”

StreamVane allows researchers to generate any type of flow field they want for testing. By specifying a specific flow field, a StreamVane can be made through additive manufacturing processes to evaluate the flow field with a turbine engine. The result is far more cost-effective than building a separate inlet for each flow field.

“Currently, if we want to test a flow field we have to spend six months and about $1 million to create a mock inlet to test the field,” Copenhaver said. “Stream Vane lets us generate any type of flow field we want to put in front of our fan to determine how it reacts with a particular distortion pattern. You can simulate any kind of inlet you want for a much lower cost, and it can be manufactured within about a week. That kind of turnaround not only saves money but it helps speed future innovation in the field.”

The StreamVane process is broken into two steps. The first is a subscale 6-inch diameter design that can be created using 3-D printers found in the mechanical engineering department and elsewhere on campus. The second step is to move up in scale. Currently StreamVanes are made in 17- and 21-inch sizes for the AFRL and Virginia Tech labs, respectively. Larger versions might be up to 42-inches.

“As you get larger you have higher stresses on the StreamVane and we have to verify that additive manufacturing technology can build the larger sizes,” Copenhaver said. “The 21-inch size is currently manufactured by a company in California. Virginia Tech has built a 17-inch model for AFRL, and two 21-inch models for research at Virginia Tech, and more are in design.  So it’s easy to see how there is a natural connection between the research taking place in both locations.”

The inlets, modeled with computational fluid dynamics, let researchers determine how to best design a machine to adapt to environments that are always changing. Different distortion patterns are generated through take-offs, landings, and aerial maneuvers and create different boundary positions for the turbine engine. Researchers need to create a fan that can adapt and operate effectively in all situations.

“We’re not designing the engine or the plane,” explained Copenhaver, “our focus is to improve design tools for the turbine engines. StreamVane is a very promising technology that will help us efficiently and cost-effectively impose multiple distortion patterns on a given fan design. To understand the key parameters in fan design to accommodate all the different distortions you can’t just use one pattern; that won’t lead to the right solution. So you have to do a parametric variation to make sure you get to the right solution. At the end of the day, we want our fans to take any type of distortion, not just one – that won’t do.”

While the design code for StreamVane resides at Virginia Tech, Copenhaver has been working with that code, bringing the knowledge and experience of AFRL to bear in improving the design capability.

“This is why I enjoy this interaction,” he said. “Virginia Tech benefits from the experience we have at AFRL and we benefit from the innovation of the university. We’re learning from each other. It’s a win-win.”

As Copenhaver winds down his time at his alma mater before returning to Ohio, he said the university experience continues to drive him. “Virginia Tech has seen a lot of change over the last 35 years. Aside from the expansion of the campus, the university is attracting really smart students; I don’t think I would be able to get into VT today. The other big improvement I’ve seen is in the diversity of the student body. If you look at the photo of my graduating class, tucked away in a corner of Randolph Hall, and compare it to the students who are graduating in mechanical engineering today, there is a lot more diversity in those class photos. More women, more minorities – and that makes our research programs much stronger; both here and at AFRL.”

Copenhaver is quick to acknowledge that while his opportunities as a researcher began at Virginia Tech, they didn’t end there. During his tenure at AFRL ,he has achieved Fellow status at AFRL, ASME, and AIAA.

“Visiting scientist periods aren’t awarded to just anyone – proposals are heavily scrutinized and the opportunities I’ve been able to take advantage of have significantly broadened my career. We (AFRL) are world leaders in propulsion development – the Air Force in particular takes the lead within the Department of Defense. As leaders in that effort, we want quality people in our organization; that’s one reason why this program is so important. It helps us make connections to get students interested in the opportunities at AFRL.

“I had the good fortune to earn my doctoral degree and have it paid for by the Air Force; and there aren’t a lot of visiting scientists programs in industry. I wouldn’t be where I am today if it wasn’t for what I’ve been able to do at AFRL. I’m well past the age where most people retire and I’m not leaving; the research is way too interesting for me to let it go.”

So how will Copenhaver transition back to life at AFRL after a year in Blacksburg?

“My boss expects me to come back all re-energized, but I don’t know – I might be worn out because I’ve been so involved here.”