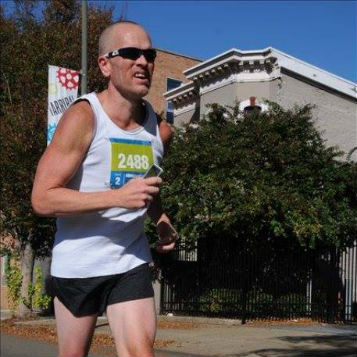 “My wife Crystal lost her twin, Christina, at age 15 to suicide,” said Graham. “I am honored to run to honor Tina and to raise awareness for such an important cause.”

Graham announced plans to run to benefit AFSP more than 7 months ago and has received 53 donations to date totaling $3,686.

Graham started running two years ago and ran the Richmond Marathon last fall and the Charlottesville Marathon in the spring. He also completed the Park to Park Half Marathon.

“Running in the New York City Marathon is definitely a bucket list item for me,” said Graham. “I’ve only been running for a short while, so it’s very rewarding to earn a spot in the marathon through AFSP.”

Graham said he won’t be in the lead pack, so he won’t be on TV for people to cheer him on, but he’ll be in the pack of runners wearing his AFSP #StopSuicide tank top nonetheless.

“Honestly, I’m not sure what to expect,” said Graham. “There will be a massive amount of people running this race. I just plan to enjoy and take it all in.”