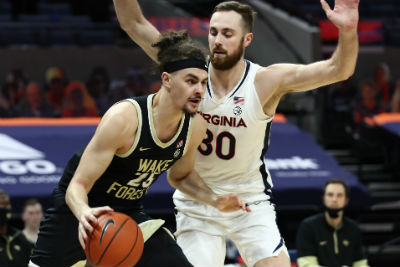 Wake Forest looked like Gonzaga in the first half Wednesday night – scoring 39 points, shooting 62.5 percent from the floor, 6-of-10 from three.

Ismael Massoud was the troublemaker.

The lithe 6’8”, 220-pound sophomore was a modest 5-of-16 from three coming in, but in the first half he was 3-of-4 from long-range, as Virginia struggled to contain him on ball screens.

Tony Bennett had to do something, and it’s something he’s loathe to do – switching on screens – but there’s principles, and there’s winning.

“The way he was screening and separating, it’s tough. We’ve had trouble with that. So we just tried to do a few different things. Tried switching some screens. We got to kind of pick our poison. So we decided to stay a little more at home on him, and I thought it was, it helped us,” Bennett said.

The Wake offense scored .759 points per possession in the second half.

That’s Gonzaga-like. The second half was what UVA’s Pack Line does to teams.

“The ball pressure, the ability to, like, let’s pick a point, and everybody be more active on the ball. Kihei got down the floor, and those things kind of mixed together. Sam was on the glass, which was good. So again, I thought the guys responded well to that challenge,” Bennett said.