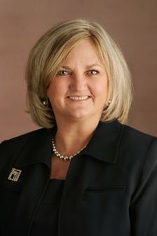 The American Civil Liberties Union of Virginia today announced that it has hired Claire Guthrie Gastañaga to succeed executive director Kent Willis, who last week announced he was leaving after 25 years with the organization. Gastañaga is scheduled to start at the beginning of June.

“Claire brings to the ACLU a huge network of people throughout Virginia who share our commitment to equality and civil liberties,” said Jayne Barnard, President of the ACLU of Virginia Board of Directors.   “What’s more, her talents are endless – she’s been a lawyer, lobbyist, administrator, writer, and fundraiser.   And, though she has not yet stepped through the door, she’s already thinking of ways to expand the ACLU’s footprint in Virginia.  The Board looks forward to working with her – we’ll accomplish a lot together.”

Named in 2010 as one of the 50 Women of Influence in Virginia, Gastañaga worked for the last decade as a lobbyist for such organizations as Equality Virginia, the Virginia Coalition for Latino Organizations and the Virginia Sexual and Domestic Violence Alliance.   Before that, she was a key player in state government, serving as Chief of Staff and Special Counsel to the Speaker of the House of the Virginia House of Delegates and as the first woman Chief Deputy Attorney General of Virginia.

Gastañaga has served on the boards of the National Association of Women Business Owners, the Richmond Gay Community Foundation, the Richmond Metropolitan Convention and Visitors Bureau, the Virginia Foundation for Women, the Poe Museum, Chatham University, the Girl Scouts of the Commonwealth Council, and the National Association of College and University Attorneys, which recognized her as one of its first two Fellows in Higher Education Law. She was the Richmond YWCA’s Outstanding Woman in Law in 1996.

“I am honored and humbled to be chosen by the Board of Directors to lead the ACLU of Virginia at this important time in the history of the Commonwealth,” said Gastañaga. “Kent Willis and his team have established a remarkable record of securing and protecting the civil liberties of all Virginians over the last twenty-five years. Recent events have made clear that the need for the ACLU to play this signal role has not abated,” Gastañaga continued. “I am fortunate that, when I take over as Executive Director in June, I will be standing on the very strong foundation for advocacy that Kent and the Board built during his tenure. I look forward to building on that foundation and ensuring that the ACLU of Virginia is positioned to carry on its important work for as long as it is needed.”

A 1974 graduate of the University of Virginia Law School, Gastañaga has argued cases in the United States Supreme Court and the Supreme Court of Virginia. She has lived in Richmond since 1985.