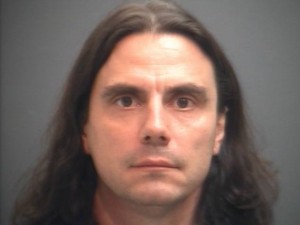 Derick Heath Ackelson, 43 years old, is now a wanted man. Ackelson was scheduled to appear in Waynesboro General District Court on Monday for a preliminary hearing for the August grand larceny charge but was a no show.  The District Court issued a capias for failure to appear for his arrest.  Furthermore, Ackelson was on bond through Waynesboro Circuit Court for the two felonies stemming from his arrest in December 2013.  Today, his surety for those bonds, totaling $55,000.00, wants off the bond.  She pledged her home in Pittsylvania County as security on the bond.  The Circuit Court has also issued two capiases for Ackelson’s arrest.  Ackelson and his wife, Amy Snead, are scheduled for a jury trial on October 15 for those charges.

The police department has requested the assistance of the U.S. Marshall’s Service in the apprehension of Ackelson.  Due to his history of firearms possession, he is considered extremely dangerous.  The police department and Waynesboro Commonwealth’s Attorney’s Office caution the public not to approach Ackelson, but to instead notify authorities.

The Commonwealth Attorney has authorized the police department to extradite Ackelson anywhere in the United States when he is apprehended.  There is a possibility that Ackelson may have fled the country.