Abilene Christian? How the game got on the Virginia 2020 schedule 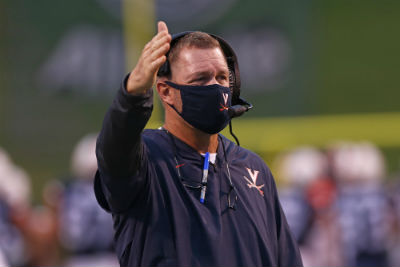 You’re wondering how it came to be that Virginia scheduled a football game with Abilene Christian.

Which means you’re not unlike Bronco Mendenhall.

“I don’t remember much about scheduling this game,” Mendenhall said Monday.

“We were really trying to find an opponent, not ‘the’ opponent, knowing it was straight through ACC schedule. Someone non-conference-wise that was playing football. That would be available to play.”

Jim Booz, a deputy athletics director at UVA who serves as the administrator for the football program, developed a list of possible opponents, and “we went through a number of them,” Mendenhall said.

“I don’t even remember the different options we had. There weren’t many that could play or would play or had this date available to play,” Mendenhall said.

“We were really looking for also things that would guarantee that they would be compliant and would test at the level that we needed to, besides having the date. So, a lot of filters were in place, and there weren’t many options available.

So, warm bodies, willing to travel, collect a paycheck, in a nutshell.

The Wildcats – that’s their nickname, the Wildcats – are 1-4 this season, the win coming at Mercer, which, why is Mercer playing, other than to play guarantee games?

Who was paying who there, and why?

Anyway, another story, that one.

Mercer, which hosted Abilene Christian, meaning it was Mercer presumably writing the check, went 0-3 in the fall, and will be back at it in February with an eight-game SoCon schedule, including a March 13 game at VMI that I will be calling on the radio.

Back to Abilene Christian: the Wildcats play in the FCS Southland Conference, where the powers are Nicholls State, Central Arkansas, Sam Houston State, McNeese State.

“Now, having been someone that coached at New Mexico, and traveling West Texas and Angelo State and Abilene Christian … I’m certainly aware of the program’s existence,” Mendenhall said. “On the East Coast, there might be many that haven’t traveled the plains of West Texas, seeing the horses and the cows and the farms and all the things out there. But I have. In fact, I used to take my wife in the car recruiting in the spring, driving from Albuquerque, all the way through those areas.

“Maybe for anyone that doesn’t love the Western life or being a cowboy, but for me it was basically blissful, and I couldn’t stay out there long enough. I just wish I was on horseback.”

Had to give Mendenhall that leeway.

Back to the breakdown: the one 2020 opponent you can use as a gauge on Abilene Christian is Army, which is 6-2 this season, though three of those wins are against FCS schools, including their 55-23 romp over Abilene Christian back on Sept. 5.

Vegas sees this one playing out similarly, with the books putting the line between 35.5 and 40, with an over/under between 58.5 and 61.5, suggesting a final somewhere in the area code of 49-10.

Which is to say, this isn’t Liberty, thank god on that, considering how Hugh Freeze has his Flames playing.

“I think it’s a challenge that it presents is framed best by previous principles and how much weight is put on an opponent,” Mendenhall said. “My team gets tired of hearing weekly when I stand up and say, ‘This is the next nameless and faceless opponent.’ I’m even talking about ACC teams.

“Meaning that the focus is us. That’s what I mean by that, not in relation to the opponent. Because that’s just the core philosophy that I have kind of extracted from John Wooden. Have the focus entirely be on us.”

Translated: get better, stay healthy, get the win, get ready for next week.

It’s a football game, so you take nothing for granted, in any of the above respects.

“Having coached at the I-AA level and being a junior college coach and working my way through different leagues, I learned really early on the quality of coaching isn’t level-specific,” Mendenhall said. “I’ve seen amazing high school coaches, and I visited some professional facilities where I wasn’t that impressed. Same thing with the different levels of college football, so I think the coaching is very strong. I think the schemes are very sound.

“Normally, the biggest difference is the depth of players in the roster and the quality of players throughout the entire roster. Then you’ll see players at any given spot where you’d say ‘man, that’s impressive’, and this is no different.

“I’m impressed with the scheme, with the strategy and with the overall, the way the program is run. Then when you start looking at specific players versus the depth of the roster, that’s usually the biggest difference, and this would be no different. We’re anxious for the challenge.”