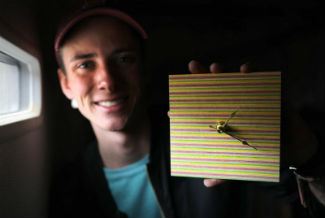 Skateboards are made from layers of plywood that often have been dyed different colors. By cutting the skateboard decks into strips and turning them 90 degrees, the various layers are exposed. Dylan displays a clock he made from one of the finished panels.

Many of us have heard the old adage “loving what you do is half the job,” but Dylan Willard, of Lexington, North Carolina, a sophomore majoring in sustainable biomaterials in the College of Natural Resources and Environment, has figured it out earlier than most.

Willard, an avid skateboarder, investigated the potential for reengineering wooden skateboard decks for use in other products, ranging from wall panels and countertops to artistic mediums. A technical paper he co-wrote on his project has been published by the Multidisciplinary Digital Publishing Institute in the online journal Recycling.

The idea came to him last summer when he returned to Blacksburg after a study abroad experience in the Dominican Republic and found himself with some downtime before the start of the fall semester.

“I moved back early, and most of my friends hadn’t returned yet, so I was looking for something to do in my spare time, Willard said. “I had taken Introduction to Sustainable Biomaterials the previous semester and really enjoyed the work we got to do at the Brooks Forest Products Center, so I was hoping I could do some work there. I had seen items made from recycled skateboards online that were incredibly artistic.”

According to Willard, skateboard decks are typically made of high-quality plywood but may last only several months before wear and tear require the rider to replace them. While the outer layers may show this abuse more prominently, the inner layers of plywood usually remain intact, making them ideal for repurposing.

Willard then asked Joseph Loferski, professor of wood mechanics in the Department of Sustainable Biomaterials, about using facilities at the department’s Brooks Forest Products Center to investigate the possibility of recycling skateboard decks.

“He got really excited about it,” Willard said. “He encouraged me to turn it into a formal research project, and I’m so glad I did. It’s really gotten me interested in research.”

Loferski also appreciated the possibilities of the research. “It was a completely novel idea that I had never considered before,” he said.

“With so many boards being manufactured, there is potential to build a market around recycled skateboards. They can be used for a variety of structural applications while maintaining an aesthetic value,” he said.

Willard first had to determine if the skateboard decks could be repurposed into structurally sound wooden panels. Working under Loferski’s supervision, he sanded the decks to remove paint, dirt, and other stains. He then cut off the protruding nose and tail of the board.

Using a radial arm saw and a band saw, Willard cut the middle, concave section of the board into strips so they could be reoriented and machined into a flat surface. The strips were then glued together and sanded to create smooth, square panels.

“Many skateboard companies dye the layers of veneer in the boards, which are exposed when the strips are reoriented into panels, so being able to see those patterns adds an aesthetic value,” Willard said.

Once Willard created the panels, he tested each sample for various qualities, including stiffness, the amount of stress a board can withstand before breaking, moisture content, specific gravity, and the moisture durability of each sample when exposed to water. He also conducted species identification to determine what type of wood was used to manufacture the skateboard decks.

“The results show that this process of reengineering makes for a strong wood product that could be appealing to those interested in developing products from recycled materials,” Willard explained. “Plus, all of the samples we tested were made of sugar maple, which is considered one of the more valuable hardwood species in North America. Knowing that can give reassurance of value to the end user.”

Recycled skateboard panels can be used in a variety of applications, limited only by an individual’s imagination. For example, Willard crafted several clock faces out of the panels, which he gave as gifts to family and friends. Willard envisions the panels being used in home constructions as counter tops or flooring, as well as artistic mediums.

Willard said that this experience has inspired him to conduct further undergraduate research. “Having my own idea and putting it into action was great, and I couldn’t have picked anyone better to work with than Dr. Loferski. He’s always willing to help students, and I’ve learned so much from him.”

Loferski added, “Research gives students skills that are marketable when they graduate. From this experience, Dylan already knows how to do research, and he’s gotten a publication out of it. It also teaches him a way of thinking about how to solve problems. I’m there to guide him, but it’s ultimately up to him to apply knowledge and see the project through.”