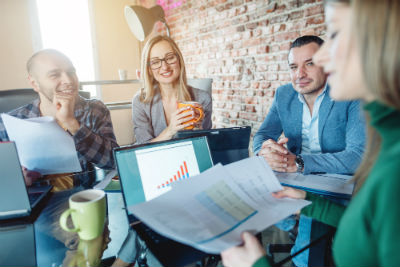 2020 has been quite a year. The world is passing through a previously unreleased event and even Augusta County hasn’t managed to escape unscathed. But it’s not all bad news. Many businesses, companies, and industries are adapting to the changes and circumstances we’re presented to ensure their operations remain valid. One industry that has demonstrated this exceptionally well is the technology industry. In a time of great challenges, Virginia’s biggest employer has powered through.

In this article, we will take a look at the local and national technology industry, the way it’s impacting the stock and exchange market, and how investors are capitalizing on it all.

Did you know that the state of Virginia has the second-highest number of tech workers in the United States? According to data from 2019, technology is one of the leading employment sectors and accounts for almost half a million jobs – 10 percent of the state’s total workforce. With an average salary of around $95,000 a year, this is significantly higher than all other occupations in the state.

The state is also home to several big names as well as start-ups and fledgling firms. Sectors of interest include software design, applications, FinTech, blockchain and crypto, and general IT. Top paying jobs include software designers and engineers, developers, coders, and senior-level executives in technology specialties. At the time of writing, there were almost 20,000 combined vacancies for software engineers, developers, and coders.

During 2020, while other areas of the national economy face a significant downturn, thankfully Virginia’s tech sector has been resilient. Jobs are safe, profits are still up, and, if anything, demands for many technological services are increasing exponentially.

But how is the situation nationwide?

Performance of the U.S. tech sector

In the first two months of 2020, more than 33,000 new tech jobs were added to the U.S. market. Later in the year, published statistics noted that there were more than 12.1 million workers in the sector and that they were increasing at around 2.6 percent each year. In total, technology sector workers accounted for 7.7 percent of the U.S. workforce. This value and growth is great news for the economy and the markets.

In August, the Bank of America announced that the technology sector is worth a staggering $9.1 trillion- more than the entire European stock market. This is due, in part to the increased performance of tech-giants such as Apple, Amazon, Alphabet, Microsoft, and Facebook who account for nearly a quarter of the S&P index. While many other sectors have noted a downturn in value and performance, the technology sector has increased significantly, especially those involved in entertainment, streaming, and eCommerce.

Forrester predicts that while companies will contract in various ways, growth will still continue – albeit at a slower rate.

Impact on the markets

The dollar has had a difficult year, but its saving grace could well be the technology industry. As it accounts for such a large slice of the U.S. economy and is going from strength to strength, it could be the boost the U.S. needs.  But how is the performance of stock markets impacting the value of the dollar?

US companies get their domestic revenue in dollars, and revenue from overseas needs to be exchanged into dollars. As they report their earnings, profit, and revenue in dollars, a strong dollar value means that the value of that dollar is less overseas. For companies that do most of their business internationally, if the dollar increases by 20 percent, this could reduce the corporate earnings by 10 percent. Likewise, when the value of the dollar decreases, some stocks may rise as foreign companies can purchase stocks at a lower price. This creates uncertainty in the markets, but there are other ways to capitalize.

A growing number of investors are switching to foreign exchange trading to make the fluctuations in the value of the dollar work for them. Instead of only benefiting when a company does well, placing trades on the value of the dollar against other currencies means that gains can be made when the value increases or decreases. In fact, there has been a 300% increase in forex trading over the last year.

Typically traders will use one of the best forex demo accounts to understand how the system works and to allow them to make practice trades before going live. Some investors even decide to speculate on the value of stocks and companies, while also trading the dollar as per forecasts and projections. Either way, utilizing these relatively new developments in the industry, is a good way to keep up to date on all the relevant economical changes.

As tech continues to lead, investment opportunities abound. We expect to see the performance of the multi-trillion dollar industry, prop up other areas of the local and national economy. This will undoubtedly impact the strength of the dollar in the months to come and, in turn, the economy itself. Investing at this time is always an unknown, but you can be reasonably confident that technology is not going to decrease in value, impact, or strength.