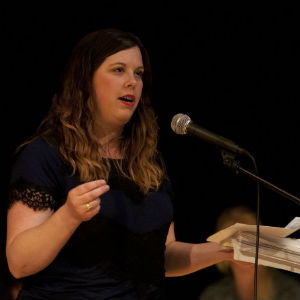 Angela M. Carter, EMU ‘09, has been shaped by hardships: she’s a survivor of childhood sexual abuse and of a lifelong battle against depression.

But Carter, a talented, emerging poet, has also been shaped by many achievements and strengths. She traces some of these accomplishments back to the supportive environment of Cohort 52 in Eastern Mennonite University’s Adult Degree Completion Program (ADCP).

“What I thought I was paying for was a degree,” she says, “but I left with much more. I believed that I could make a difference. Sometimes it takes others believing in us in order for us to move forward on our own behalf.”

As she continues to strengthen her voice and work to heal others, Carter wants to be known equally for her hardships and accomplishments, for they both shape her identity and contribute to that empowered voice – one that defies the victimhood and stigmatization she wants to help fellow survivors escape.

“I’m here,” she says, “and I’m a happy person who just happens to have a mental illness.”

Across the pond and back

Like many ADCP students who return to school to complete their degrees, Carter arrived on campus with a variety of responsibilities, obstacles and education experience. After growing up in a small Virginia town, she enrolled at a community college, but experienced crippling social anxiety, fearing people might think her crazy because of her depression. She “fled,” as she says, to England, but found that her fears followed her across the Atlantic. Realizing that her inner narrative was more caustic than anything others said was “very liberating.”

In England, Carter capitalized on several years of experience with computer installation and repair, becoming an IT consultant and working in web and graphic design. For five years, she also co-founded and ran “Parentbaby,” an e-commerce site.

She met and married her husband in England, and while visiting the Shenandoah Valley, they decided to move and raise their two daughters – now ages 10 and seven – in Harrisonburg. Carter sought stability: “a place to belong, a place to be.” But moving to a strange city without friends or career connections prompted her to seek further education. She found EMU, and “everything aligned” with scholarships and enrollment.

“There was never a moment when I thought, ‘This isn’t right,’” she says.

Her classmates understood that “it was not easy, whatsoever,” to be both parent and student.

Though deeply depressed throughout some periods of the program, she never missed a class. Her classmates were a diverse collection of people, but through meeting weekly, they developed a camaraderie. “I haven’t encountered that kind of friendliness outside the program,” says Carter.

Terry L. Whitmore ’70, one of the more experienced professors in the ADCP program, particularly noticed her psychological battle. After one class, he called to ask how she was doing. Carter says that just hearing the phone ring was heartening. To someone who is depressed, says Carter, a simple call, or card “might be their saving grace.”

Through such moments of connection, Carter began to gain confidence in herself, and a sense of personal identity and worth. “I became ‘me’ while I was there,” she says.

Finding a voice through poetry

Two and a half years ago, Carter began to publish the poetry she’d written in secret throughout her life.

Growing up, Carter was told that depression did not exist, and that to spare others discomfort, she should not talk about the abuse she’d endured. That silence was much worse than the abuse itself, she says. “It’s a heavy burden to carry.”

Her first book, “Memory Chose a Woman’s Body,” was published in 2014. The poetic memoir focuses on the abuse she survived as a child, and the effects of the silence that survivors endure, while offering hope in the end. “There’s a desperation in it,” says Carter, “and I’m proud of that.”

Reviews have said that her poetry is “hard to read” because of the subject matter, but Carter counters that “the truth is beautiful, even when it’s not fun and games.” Nominators of the Pushcart Prize and Virginia Literacy Award agree. She also works as a visual artist, often combining art shows with poetry.

Carter’s family has rallied around her work. Her mother, with whom Carter did not have a positive relationship for most of her life, was originally “dead against this book coming out.” But after reading the manuscript, she told Carter that “she now understands why the caged bird sings.” Her mother is now one of her largest supporters.

“My husband supports me and my children look up to me,” says Carter. “If the whole world treated these topics the way my chosen family does, I doubt there would be a need to me to do all that I am.”

A full calendar of engagements, including a collaborative art show opening at Ruby’s Lounge on June 5 in Harrisonburg, speaks to the significance of Carter’s work. “It’s a dream come true,” she says. If anyone had told her four years ago where she would be today, “I could have never, ever believed you.”

“What I’m most proud of is how the confidence I gained in the ADCP program helped during my journey of becoming a successful author,” says Carter. Through the program, she gained “belief that I have the power to make a difference in any situation, and that my instructors truly cared about my well-being.”

After each poetry reading, Carter has received an outpouring of emotional feedback. Often, people approach her in tears, unable to speak. She recalls young adults who have “a gleam in their eyes” after a performance, saying they would start writing because of her.

The message she hopes to impart to her listeners is that “there’s a lot of solace in knowing that you’re not alone.” Carter encourages anyone who is dealing with depression and trauma to read about mental illness, and learn about the societal prevalence of their struggle. Breaking the stigma and loneliness surrounding mental illness is paramount to healing, she explains.

For Carter, some of that healing is rooted in her experience at EMU.

Article by Randi B. Hagi. Photo by Michael Sheeler.