A new year under way at Fishburne 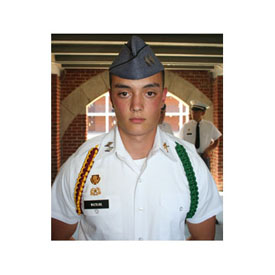 “This school works wonders. It really changed me. It changed the way I act, respect, my discipline,” said Watkins, a senior and the new battalion commander, at a ceremony Tuesday marking the first formation of the corps of cadets for the 2010-2011 school year.

Watkins, a Fairfax Station native, walked on campus in 2008 just looking to improve his grades. He’s now aiming for an appointment to the United States Naval Academy on his way to a career in the Marine Corps.

“It’s lot of hard work,” Watkins said of his appointment as battalion commander. “The honor, the commitment – it takes a lot of commitment. It feels good to be part of something bigger than yourself.” 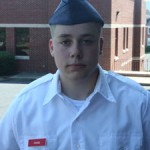 First-year cadet Andrew Simons enters Fishburne as Watkins did two years ago. The Northamptonshire, England, native settled with his family in Yorktown three years ago, but he was struggling academically in high school.

“I came here to change that,” said Simons, a junior.

Simons, on campus less than a week, is already well aware that life at the military school is going to be “demanding.”

Edited by Chris Graham. Chris can be reached at freepress@ntelos.net.