A new look for Virginia: Which may have to win with its offense 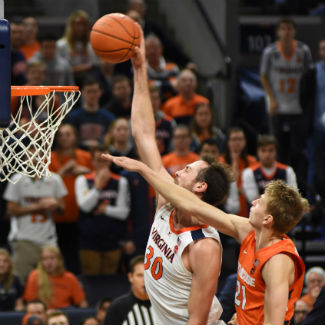 You know that Virginia will be better on the offensive end in 2020-2021. Just say this name: Sam Hauser.

The question isn’t about the offense. It’s about the defense, which ranked, and stop me if I’ve told this story before, first in the nation in adjusted efficiency in the KenPom.com numbers.

The keys to the defense the past couple of seasons, which famously includes that 2019 national title, are no longer on Grounds.

Mamadi Diakite and Braxton Key were a pair of Swiss army knives that coach Tony Bennett could deploy in the post, on the perimeter, to hard hedge on the pick-and-roll, on switches.

You don’t often have one guy who can guard one to five. Two years ago, Bennett had three – Diakite, Key and 2019 #4 overall NBA draft pick De’Andre Hunter.

Bennett said the 6’8” Hauser will be asked to defend four and some three in his Pack Line, meaning he’ll be in the post some against bruisers, and on the perimeter some chasing around shooters.

Hauser, for his part, knows the deal. Being able to shoot the lights out fills out the box score, but it’s what you do on defense that gets you on the floor on a Tony Bennett-coached team.

“I think I’ve taken steps, for sure,” Hauser said. “Coming in, I was OK, and I think I’ve developed a little bit into a better defender, and that’s a credit to the work with Coach Mike Curtis and Coach Bennett as well. If I want to play here, I’m going to have to be able to play some defense, so I took that personally and individually to get better at it, and I think I have.”

You’d think that the year he spent as a redshirt would have acclimated him to what he will need to know in terms of the nuances of the Pack Line, but Hauser as a redshirt was the guy on the scout team making life miserable for Diakite and Key as the toughest stretch four they would see.

It may take a few games to learn how to defend threes on the perimeter and fours in the post using the keys of the Pack Line philosophy.

It took Jay Huff the better part of three years to learn, but when the light finally went off, whoa.

What would get him yanked from the lineup was his struggle defending the pick-and-roll, which is the focal point of the Pack Line – taking away that basic staple of just about every offensive attack.

How far he has come there was most evident in the defensive play of the year from last season, his block in the final seconds on a Vernon Carey bunny off a pick-and-roll pass from Tre Jones that preserved the 52-50 win over Duke in JPJ.

The block was Huff’s 10th of the night, which, yes, is just absurd – but you forget that he also had 15 points in that one, on 7-of-9 shooting, and that he went for double-digits in scoring 14 times last season, making himself a go-to guy on offense in the process.

“With Jay you can space the floor on offense with some shooting and let some of your perimeter guys touch the paint,” Bennett said, which, yes, might seem counterintuitive, but it’s the way basketball is played today – big guys shooting threes (Huff shot 35.8 percent from behind the arc in 2019-2020), to clear the lane for dribble-drives.

Which is where 5’9” junior point guard Kihei Clark enters the equation. No one questions what Clark can do on the defensive end; what was nice to see in 2019-2020 was how he was able to make himself into a weapon on offense.

Clark averaged 10.8 points and 5.9 assists per game last season, shooting 37.5 percent from the floor and 37.5 percent from three – and while you’d like to see the shooting from the floor, in particular, be a little more efficient, you probably remember that a lot of that was lack of other options, which won’t be an issue this season, with the additions of Hauser, of freshmen Jabri Abdur-Rahim and Reece Beekman, possibly transfer sharpshooter Trey Murphy.

You’re not going to see this team have to win four games not getting out of the 40s, is the point there.

But while there’s more talent on the floor offensively, the defense is going to be a work in progress.

“There’s some advantages to this year’s team and differences. Last year could win because of their defense. We struggled a lot. Offensively we didn’t shoot it great. But we won games just because we were so tough defensively. The year before when we won it all. They couldn’t even win games with their defense like last year’s team could,” Bennett said.

“This year’s team, they have not shown me up to this point that we can win games with our defense yet. Trust me, that’s a point of emphasis, but at times they show some great spacing, the opportunity to knock down shots of score and score in a variety of ways. It’s just adjusting and evolving, and we have some more interchangeable parts, I’d say, this year.”